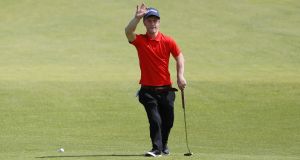 Brendan Lawlor acknowledges the crowd on the 18th green on his way to winning the EDGA Scottish Open at The Renaissance Club in North Berwick. Photograph: Kevin C Cox/Getty Images

Like just about every other golfer, Brendan Lawlor’s on-course feats have been put into cold storage for the time being but the 22-year-old Dundalk man – one of those pioneering professionals on the disabled golf circuit – has landed sponsorship backing from Boston-based Synergy Investments, a big player in the American real estate industry.

Lawlor, who has a rare condition called Ellis-van Creveld syndrome, characterised by a shorter stature and shorter limbs, played to an elite level as an amateur – including being part of Dundalk’s provincial winning Barton Shield team – but has made a huge impact globally on the disabled golfer’s circuit, including winning the EDGA Scottish Open tournament last year.

Having signed with Modest Golf, the management agency founded by singer Niall Horan, Lawlor has become one of the most in-demand players on the scene and his deal with Synergy Investment further reflects his appeal.

“It’s great to have a world-renowned company like Synergy Investments show their faith in me. They’re a company who want to break down barriers and promote inclusivity in everything they do and I can’t thank them enough for recognising me as someone who demonstrates their core values. I’m hoping together we can put disability golf on the map.”

Lawlor was due to play on a disabled team at the GolfSixes tournament in Portugal on the European Tour next month. Unfortunately, that €1 million tournament – won in the past by Paul Dunne and Gavin Moynihan – has been cancelled because of the coronavirus crisis.

Evian quick off the mark

With golf everywhere put on hold, you’ve still got to hand it to the Evian Championship for being so quick out of the traps in nabbing the slot originally pencilled in for the women’s golf tournament at the Olympics

The news of the Olympics postponement had hardly been made when the Evian – originally scheduled for July 23rd-26th – grabbed the later date of August 6th-9th for its event in Evian-les-Bains in France, making for a nice little European swing to be followed the next week by the Scottish Open at North Berwick.

“This adjustment makes for easier travel for players and assists us as we look to reschedule previously postponed events during a crowded summer and (autumn) timeframe,” said LPGA Tour commissioner Mike Whan.

Of course, such opportunism may yet fall foul of the ongoing global crisis . . . but you can’t but admire the speed at which Evian moved!

“We’re keeping things in perspective as people across our community and around the world are struggling with the current unprecedented health crisis.” – Davis Love III looking at the bigger picture, after his family home was completely destroyed by fire. Love and his family all managed to escape the house uninjured.

“To me, the Major championships take priority over the Ryder Cup. It’s only going to be a viable opportunity if we feel good about the qualifying process and we feel the teams are legitimate.” – Graeme McDowell on prioritising the four Majors if and when the championships are rescheduled later in the year. G-Mac followed up by admitting: “Goes without saying that this is only a relevant comment if and when the world gets back on its feet.”

That would be the amount in euros which Sergio Garcia has donated to a Red Cross campaign in Spain to raise €11 million to help combat the coronavirus. Garcia has teamed-up with tennis player Rafa Nadal to highlight the campaign . . . . and has also put his money where his mouth is to support the efforts.

Three Irish players – Mark Power, Caolan Rafferty and Olivia Mehaffey – have been selected on the International Team to take on the United States in the Arnold Palmer Cup, scheduled to take place at Lahinch Golf Club on July 3rd-5th. Although the teams have been finalised, the organisers will monitor the coronavirus pandemic, seeking input from the HSE, closer to the event.

On March 31st, 1996, Patty Sheehan won the last of her six career Major titles when she sank a seven-footer for par on the 72nd hole to win the Nabisco Dinah Shore (now known as the ANA Championship) at Mission Hills Country Club in Rancho Mirage, California.

In what was the 25th staging of the championship, American Sheehan finished a stroke clear of a trio that featured Annika Sorenstam, Kelly Robbins and Meg Mallon. Sheehan had shared the lead with Brandie Burton heading into the final round, and celebrated her title-winning par putt on the finishing hole by performing a cartwheel.

Having played his shot from a greenside bunker and successfully getting his ball onto the green, Player A rakes the bunker and places the rake between the putting green and the bunker without any thought of influencing a ball. The player, who now has a downhill putt towards the bunker, and realises the rake might stop his ball and plays without moving the rake. The player putts and the ball is stopped by the rake. Is he subject to a penalty?

Yes, because he has breached Rule 11.2a/1 (Equipment left in position after player realises it could be helpful if the ball were to hit it). Once he realised he had a downhill putt and that the rake could possibly stop his ball from going into the bunker, Player A should have removed the rake before making his stroke.

1 Sideline Cut: Vignette shows why Bird is the true shark in The Last Dance
2 Farrell and O’Connell provide insight into changes in Ireland’s analysis
3 Liverpool and Everton to oppose plans to play games at neutral venues
4 Anfield and Cheltenham show sports again lacking in looking after their own
5 Niyi Adeolokun and Tom McCartney among Connacht departures
Real news has value SUBSCRIBE

HRI announces full jumps programme up to start of August 17:03
La Liga season to restart on June 11th with Sevilla-Real Betis derby 16:26
Liverpool and Everton to oppose plans to play games at neutral venues 17:18
Niyi Adeolokun and Tom McCartney among Connacht departures 13:00
OFI say restrictions should be eased for Irish Olympic hopefuls 10:43
Here is your handy guide to sport on television this week