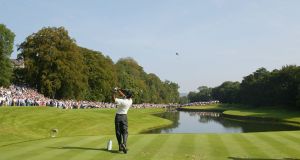 Tiger Woods in action during the third round of the American Express Championship at Mount Juliet Golf Club in September, 2002. Photograph: Laurence Griffiths/Getty Images

Although not included in the initial six-tournament restart to the PGA European Tour schedule, there remains hope – in a window of opportunity – that the Dubai Duty Free Irish Open, actually due to be played this week at Mount Juliet but postponed due to the Covid-19 pandemic, could yet be saved and possibly slotted into the first week of October at the Co Kilkenny resort.

In rebooting its itinerary, the European Tour has opted for a six-week stretch of tournaments in Britain – all to be played behind closed doors – starting with the British Masters at Close House in the north of England on July 22nd-25th to start a sequence that then takes in events in England and Wales to run up to the end of August.

With September effectively currently scheduled to play host to the US Open and the Ryder Cup, the second phase of the European Tour season is set to kick off again with the Scottish Open at the Renaissance club on October 8th with the flagship BMW PGA Championship at Wentworth on October 15th.

Given the Irish Open’s status as a $7 million Rolex Series event, it would seem to make sense to form a run of three successive weeks of tournaments of such standing. So, the Irish Open could conceivably kick-start the sequence ahead of Scotland or complete it post-Wentworth.

“The Dubai Duty Free Irish Open is still absolutely critical and it is very much part of our plans,” said European Tour chief executive Keith Pelley, speaking in a teleconference to signal the tour’s restart. “I don’t want you to think that the Irish Open, [because] it is not part of this announcement, is any less important . . . we currently have three or four date options for it.”

Pelley added: “We could have announced it today but it wouldn’t have been 100 per cent and I wouldn’t feel comfortable with that. There are so many variables, moving an event from one date to another, title sponsor support, venue support, government support, [we want to get] the best possible date.”

Prioritising those elite Rolex Series events towards the tail-end of the season, finishing up with the DP World Tour Championship in Dubai in December, is key to salvaging the season but, for starters, the decision has been made to breathe some life back into the tour with a run of British-based tournaments – British Masters, English Open, English Championship, Celtic Classic, Wales Open and UK Championship – which will have reduced purses of €1 million and fields of 144 players who will be required to undergo testing for the coronavirus as well as daily symptom checking at the different tournament venues.

In addition to the tournament prize money, a bonus prize of €500,000 will be on offer for a mini-order of merit taking in the six events of the so-called “UK Swing” on the European Tour’s reboot.

All tournaments played in the reshaped 2020 season will be governed by the Tour’s comprehensive health strategy which has been developed by Dr Andrew Murray, the European Tour’s chief medical officer, in consultation with health care specialists Cignpost, who will deliver the testing procedure, and advisers in many of the 30 countries the Tour plays. This strategy will continue to evolve, aligned with international government guidance and health guidelines.

While the cessation of events on the European Tour since the Qatar Masters at the start of March has come with a huge financial hit, Pelley insisted those issues would be overcome. “Is the European Tour bankrupt or running out of money?” he asked, then answering: “Absolutely not.” He also added that the tour had contributed to assist 50 players in what he termed “financial hardship”.

“Since the suspension of our 2020 season in early March, we have taken a measured approach in reassessing our schedule, informed every step of the way by our medical advisers and government guidance,” said Pelley.

“We have consistently said that safety is our absolute priority and that is why today we are announcing our resumption in two months’ time supported by a comprehensive health strategy which has been led by our medical team.

“Without question we have had to think differently about the remainder of our 2020 season which is reflected in today’s announcement. As golf’s global Tour, diversity is ordinarily one of our biggest strengths, but in this instance it has become one of our biggest challenges. Initially, therefore, based on the expert guidance we received, playing in clusters, in one territory, is the best option in terms of testing, travel and accommodation.”