DeChambeau has Majors on his mind as he defends in Dubai 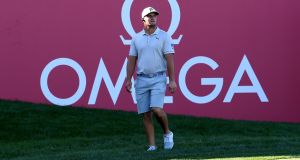 Bryson DeChambeau walks off of the 18th green during a practice round prior to the Dubai Desert Classic at Emirates Golf Club. Photo: Ross Kinnaird/Getty Images

Bryson DeChambeau is hopeful that the first successful title defence of his career can lead to challenging for major success this season.

DeChambeau stormed to a seven-shot victory in the Omega Dubai Desert Classic 12 months ago, the seventh tournament victory the American has enjoyed since turning professional in April 2016 after a stellar amateur career.

The 26-year-old was the fifth player after Jack Nicklaus, Phil Mickelson, Tiger Woods and Ryan Moore to win the NCAA and US Amateur titles in the same year in 2001, but to date his best finish in 14 majors is a tie for 15th in the 2016 US Open, his first in the paid ranks.

Speaking at a pre-tournament press conference at Emirates Golf Club, DeChambeau said: “Last year I didn’t drive it my absolute best but I was still able to get it done. It’s going to take great ball-striking, iron play and making a lot of putts.

“My wedge game is much improved I feel like and personally I’m looking forward to the new test this week. The rough is a little bit longer, so being in the fairway is going to be key, and if you have a great wedge game you can get up and down and fix those mistakes you have, it’s definitely a viable option to win.

“All of my mind is taken up for the need to do well in the majors. That’s what I haven’t done well in particular in my career so far and I am keen on changing that.”

World number 17 DeChambeau is part of a strong field in Dubai which includes major winners Louis Oosthuizen, Shane Lowry, Henrik Stenson and Sergio Garcia, as well as last week’s winner Lee Westwood, whose victory in Abu Dhabi at the age of 46 gave renewed hope to the older generation.

“It’s all about bringing as good a game as you can do and we know experience is a good part in this game, to have played it in different conditions over the years and different courses and all the rest.

“At times we can’t really compete with the longest players in the game but we can compete with other factors and, of course, that’s something we try to do as good as we can. We certainly keep the dreams alive of winning golf tournaments.

“I don’t know if it’s down to possibly swing, if your swing is not taking too much toll on your body and not wearing your back down too much, you probably can keep it going.

“I’ve spent a lot of time on the physical side the last 10 years to try and buy myself some extra time and for recovery and practice and everything else.”