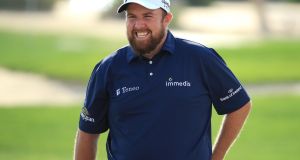 Shane Lowry isn’t one for writing down his season’s goals on a slip of paper and locking it way for safe-keeping to be examined at a later time. For him, those targets are in his head; although it wouldn’t require a degree in rocket science to work out what aims are swimming around his brain in a year like 2020, which manages to add a Ryder Cup and an Olympics onto an already jam-packed schedule.

One of the upshots of Lowry’s runner-up finish in his first appearance of the year in the Hong Kong Open is that he has slipped into view on the European team Ryder Cup qualifying, at 16th position in the World Points list which you can be sure was spotted by captain Pádraig Harrington. Not that the two players are actually talking about it, if you are to take Lowry at his word.

On the eve of his defence of the Abu Dhabi Championship in the Middle East, Lowry revealed that the two friends - who were at the races in Leopardstown over the post-Christmas period and who indulge in pre-tournament short game shoot-outs when at tournaments as well as meeting up for meals - don’t ever mention the “R” word when together.

“It’s not that we’ve made a conscious decision not to talk about it, we just don’t,” said Lowry, perhaps revealing one of those defensive mechanisms in mainly keeping those personal goals to himself.

But, without doubt, making that Ryder Cup is the main one for the year ahead: “I’ve set little goals. Obviously I have goals in my head. I don’t write them down. I don’t do any of that. So I have it in my head what I want to achieve this year, and like the main thing for me is make that Ryder Cup team, and I’ve set my schedule out, set everything out to do that.

“I think I need to just bring it back to basics and back to what I do best, and that’s just being the best version of myself every day, and that’s all I can do. We talked about it a lot last winter and we talked about it a lot this winter again, and just going out to shoot the best score I can every day. Look, I go out tomorrow, might be 72, it might be 62, but I know it’s the best I can do and I’ve prepared as well as I can. If I do that for the whole season, I’ll get to where I want to be.”

However, Lowry hasn’t felt the need to start over-complicating his playing schedule and, apart from starting out in Hong Kong, compete with blisters and sores on his hands from what he called a “mini-bootcamp” in Dubai with physical trainer Robbie Cannon the week previous, and adding Saudi Arabia into the mix, he won’t be adding in extra tournaments in the business part of the summer.

Just like a year ago, he has also decided to bypass the Scottish Open ahead of his defence of the British Open the following week.

“As regards the way the schedule is this year, it’s so tight that the tournaments are there, it almost does itself for you. I am playing a lot of golf this year, and I don’t have that many breaks, but you know, that’s the way it is because the season’s just the way it is. When I play, I’m going to have to play well.”

Of the demanding schedule, and juggling membership on bother sides of the Atlantic, on the European Tour and the PGA Tour, Lowry admitted: “It is quite difficult. You do need to play well in the big events, to pick a schedule that works for you and you need to pick golf courses that work for you. When you’re there, you need to play well. It is a little bit more difficult playing both tours but it is kind of where you want to be. It’s exactly where I want to be. I’m looking forward to the challenge of this year.”

As if to underpin Lowry’s elevated status in the game as the current custodian of the Claret Jug, he is in the marquee three-ball for the opening two rounds in Abu Dhabi as he sets out in defence of his title alongside world number one Brooks Koepka and England’s Tommy Fleetwood, the player who finished runner-up behind him in Portrush last July.

Lowry hit the ground running in Hong Kong. He is looking to Abu Dhabi to be the springboard - again - to another great year with the Majors, the WGCs, the Olympics and the Ryder Cup all on the road ahead. No wonder he’s excited.