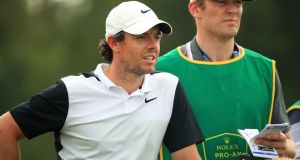 Rory McIlroy: he has held the world No 1 position seven times during his career, but not since September 2015, when he occupied top spot for just one week. Photograph: Ross Kinnaird/Getty Images

Rory McIlroy gets the chance to let his actions speak louder than words on his return to competition. It was only last month that the Northern Irishman’s self-confidence was evident – “I believe on my day I’m the best player in the world, and I think I can do that for a long time” – in enjoying his winter’s break, and he will get an immediate opportunity to prove a point at the Farmers Insurance Open in Torrey Pines where a win would return him to world No 1 ahead of Brooks Koepka.

McIlroy has held the world number one position seven times during his career, but not since September 2015, when he occupied top spot for just one week. In all he has spent a cumulative 95 weeks as No.1 in his career, but six different players – Jason Day, Jordan Spieth, Dustin Johnson, Justin Thomas, Justin Rose and Koepka – have all enjoyed stints there since McIlroy last did so.

Only a win at Torrey Pines would enable the 30-year-old Co Down man to reclaim the top spot, his return to tournament play – after an eight-week break – coming at a tournament where he finished tied-fifth a year ago.

Although he failed to win a Major last season McIlroy enjoyed a hugely successful campaign – four wins, among them The Players – that saw him finish in the top-10 in 19 of his 25 starts last year and it was that level of consistency which most pleased him.

In preparing for his return to action in the Farmers Insurance Open, McIlroy has had the benefit of his coach Michael Bannon working with him for a week in Jupiter, Florida, while, away from golf prepping, he also factored in time to attend Conor McGregor’s UFC fight in Las Vegas last weekend.

Of uncomplicating his swing thoughts heading into this year’s itinerary of tournaments, McIlroy recently remarked: “Previously some years I’ve tried to be too perfect, I’ve tried to do stuff with my swing . . . everyone thinks that I’m a feel player, but there’s a lot of technical stuff can get in there too. I really want to play with as much feel as possible.”

McIlroy – currently sixth in the FedEx Cup standings on the PGA Tour where he is seeking to become the first player to successfully defend that season-long title – kickstarts his 2020 itinerary in Torrey Pines, and is next scheduled to play in the Genesis Invitational in Los Angeles next month. McIlroy is the lone Irish player in the field in the Farmers Insurance, where Rose is the defending champion.

Shane Lowry, aiming to bounce back from the disappointment of a missed cut in his defence of the Abu Dhabi Championship, and Padraig Harrington are both in the field for this week’s European Tour event, the Omega Dubai Desert Classic.

The inaugural Gainbridge LPGA at Boca Rio in Boca Raton, Florida, this week marks Leona Maguire’s first start of the season on the LPGA Tour. Maguire, who earned her full card off the Symetra Tour last season, and Stephanie Meadow, who successfully retained her full tour card, are competing in the tournament won last year by France’s Celine Boutier.

Maguire’s debut season on the LPGA Tour starts with something of global odyssey, as – following on from the tournament in Florida – she will move on to the ISPS Handa Vic Open and the ISPS Australian Open for back-to-back weeks in Australia, before moving on to play in China.

Meanwhile, Alexandra Armas has been confirmed as the new permanent CEO of the Ladies European Tour, reporting directly to the LPGA-LET joint venture board of directors, chaired by LPGA commissioner Mike Whan.

Armas took on the role of acting CEO in October 2019, working closely to complete the 2019 season and to build the 2020 schedule, which will be announced this coming Friday. She previously held the position of LET executive director from August 2008 to December 2012.

Woods has history in his sights

Tiger Woods is back, and chasing history, at this week’s PGA Tour stop, the Farmers Insurance Open at Torrey Pines: playing competitively for the first time this year, Woods is attempting to claim an 83rd career win on the PGA Tour, which would establish him as a man apart.

Currently sharing the record of 82 with Sam Snead, Woods – who joined Snead on that mark with victory in the Zozo Championship in Japan last October – returns to a venue which has played a huge part in his storied career to date.

Woods is a seven-time winner of the Farmers Insurance Open – which is played over the North and South courses at Torrey Pines – and he also won the 2008 US Open at the famed Californian venue, a victory that served as the 14th Major of his career and which took until his win in Masters last year ended an 11 year drought and took him to 15.

An indication of Woods’s quite remarkable return to prominence is that he was ranked 539th in the world rankings when he teed-up in the 2018 Farmers Insurance Open. Two years on, he returns to a favoured golfing haunt as the world number six and with a first opportunity to break free of sharing the all-time win record with Snead.

Snead was 52-years-old when he won his 82nd tournament and, on joining him on that mark in Japan, Woods – who was confined to a very limited playing schedule in the years from 2014 to 2017 as he suffered with knee and back injuries, which required surgery – remarked: “As far as playing until 52, I hope that’s the case. If you would have asked me a few years ago, I would have given you a different answer. But certainly the future looks brighter than it has, and hopefully I can be as consistent as he was well into my 40s and early 50s.”

Woods turned 44 on December 30th. Time is again on his side.