Women’s British Open to go ahead but without fans 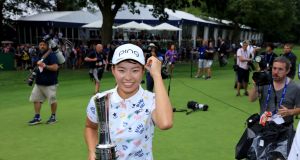 Women’s professional golf has been handed a boost after it was confirmed the British Open will take place as scheduled this summer. The event, which will run from August 20th-23rd at Royal Troon, is to be played without spectators.

While the PGA Tour has been back in operation since early June and its equivalent in Europe resumes later this month, leading female players have enjoyed no such competitive leeway. That is thought to have been prominent in the minds of the R&A, which now presides over the Women’s British Open. It will be the first women’s major of 2020 because of Covid-19 disruption.

Emphasising the strict guidelines that will be employed, the R&A said in a statement: “The championship will enforce strict health and safety protocols including the creation of a biosecure zone. Only personnel essential to the championship’s onsite operations, namely players, caddies, officials and staging staff, will be inside the zone, with their movements for the week limited to the golf course and designated secure hotel.

“All personnel will be required to return a negative Covid-19 test from an authorised testing centre and will be subject to further daily temperature checks and rigorous protocols designed to maintain the integrity of the zone and the health of those within it.”

Nigel Huddleston, the UK sports minister, said: “Getting elite women’s sports back safely remains a top priority. We’re working hard to ensure we don’t lose any of the great momentum that has built up in recent years.”

The Ladies Scottish Open has also now confirmed it intends to proceed behind closed doors, at the Renaissance Club in East Lothian from August 13th. That co-sanctioned tournament will be the first on the Ladies European Tour since mid-March. The US-based LPGA Tour is set to return at the Drive On Championship in Ohio from July 31st.

“With men’s professional golf back playing, it is important that we are able to follow suit,” said Catriona Matthew, Europe’s Solheim Cup captain.

Confirmation that the Ryder Cup will be postponed from September until 2021, expected last week, will arrive within 48 hours. The European Tour is expected to subsequently reveal the rescheduled Irish Open will take the Ryder Cup’s 2020 slot. – Guardian

Sligo v Waterford postponed due to player’s Covid-19 symptoms 11:34
Ronnie O’Sullivan records fastest win in Crucible history 12:05
Justin Thomas takes world No1 with victory in Memphis 09:06
The Offload: Schools rugby talk in the Seanad appears tone deaf 09:00
All in the Game: Klopp gets the last laugh in quiz show 09:00
Here is your handy guide to sport on television this week