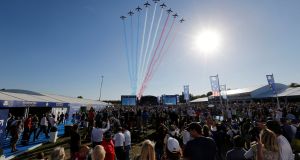 A flypast during the opening ceremony for the 2018 Ryder Cup. Photo: Regis Duvignau/Reuters

To the west village, then, for the opening ceremony. And if ‘west village’ conjures up cool bohemian images of Warhol and Dali and the Stonewall Riots, then sorry to disappoint but this is oh-so very much not that. The west village of Le Golf National is where you go give Ryder Cup Inc your money. At one end is a merchandise hangar about the size of Carlow, at the other is a stage the Eurovision organisers might have deemed a little de trop.

In between is a late-afternoon scene straight out of a music festival – if there was a music festival for people lounging about in chinos and boat shoes clutching grab bags of sensible souvenir clothing. The Electric Polo-Neck, perhaps. Lacosteonbury.

Up on-stage, an excitable young warm-up guy is getting everyone in the mood. The TV cameras will be getting switched on any minute so he needs a bit if USA-USA-USA and Olé-Olé-Olé going if everyone wouldn’t mind very much. “Mister David Ginola will be coming on soon to host the programme so please, make a lot of clap for him,” he says, to a pleasingly healthy amount of juvenile sniggering.

When the erstwhile Tottenham and L’Oreal winger takes the stage, he’s not actually on stage. He’s down in the midst of the 40,000 crowd, welcoming the world to the Ryder Cup. Or at least that portion of the world that is watching the opening ceremony of the Ryder Cup on TV, which presumably brings the total up to close on 41,000.

After a rousing rendition of La Marseillaise (is there any other kind?) Ginola stares down the barrel of the camera and informs us “that this rivalry starts right at the top”. You wonder what he can mean and then you remember that right at the top, top, the bigly top is a man who is a fan of golf and a fan of American dominance on the world stage. Oh, no – they didn’t, did they?

Well, if they did, they fairly tidied him up a bit. The face that flashes up on screen could at a stretch be Donald Trump but only if he’d undergone a Queer-Eye makeover. The accent is still north American but the hair is far too neat (and real) and the glasses are way too metrosexual. No, this is Keith Pelley, head of the European Tour. ‘Right to the top’ is a fairly relative term at the back of it all.

Time to bring on the teams. And a reminder that pro golfers are the only group of people in the world who look way more macho in golf clothes than out of them. In his Captain America get-up on the course, Patrick Reed is a monster – 14-and-a-half stone of seething, snorting, Euro-hunting malevolence. In his navy blazer and cream slacks, you’d mistake him for the quietly-spoken treasurer of a Tidy Towns committee.

This rule applies, of course, to everyone except Jon Rahm. In a suit or out of a suit, shades on or shades off, Rahm continues to look like John Belushi at three in the morning after everyone else has cried enough. If the golf thing doesn’t work out, he’d make a fine bouncer for nightclub somewhere in rural Ireland.

Speeches. Jim Furyk up first. He stresses the bonds of unity that tie France and America and says that the Statue of Liberty on the Team USA golf bags this week has been picked deliberately, it having been gifted to the USA by France in 1886. “And so, before we play any golf, I think it’s entirely appropriate that I say to the people of France from the people of America, ‘merci beaucoup’.

After introducing his team – with Tiger Woods getting by far the loudest and longest ovation – Furyk closes with a last swing at a bit of French. It’s his only misstep all day – despite the phonetic “veeve le joo de golf” written up on the teleprompter, Furyk bails out with a simple “Vivre de Golf!”

Thomas Bjorn’s speech feels like a regular boiler-plate job until a couple of seemingly pointed stanzas on European unity. “This great sporting occasion is the one time where Europe is united. This is the one time we play under that flag and this is the week, more than any other, that that flag truly represents the boundaries of all of Europe.

“As I said at the start, I have never been as proud as I am now to stand here and be your captain. That pride is shared by millions of people in the 44 countries across this great continent. To everyone throughout Europe, we make this pledge. We will play with pride, we will play with passion and above all we will play for that flag.”

He denied afterwards that he was talking about you-know-whatsit but everyone in the west village took their own meaning from it. And after that, what else is there to say?

1 Heroic insanity: When Michael Dunlop raced home in memory of his father
2 Tyrone player claims some counties training in breach of Covid-19 rules
3 Players focus more on life outside game due to lockdown, says GPA
4 O'Sullivan may face action by WPBSA
5 Will Smith made a bags of Bagger Vance
Real news has value SUBSCRIBE