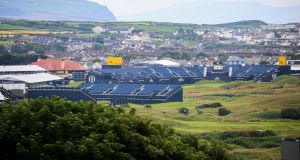 Royal Portrush Golf Club in Co Antrim. With all of the world’s top golfers playing, the 148th British Open is the biggest international sporting event ever staged in Northern Ireland. Photograph: Matt Mackey/Inpho

The analogy of moving mountains to make it possible for the 148th British Open to be played amid the majestic dunes of Royal Portrush Golf Club isn’t overstretching the imagination, for the championship’s return to the Causeway Coast – some 68 years since its first staging on Harry Colt-designed masterpiece – has involved a process unlike no other, at times delicate and often brave.

A germ of an idea was first planted on the Monday evening after Darren Clarke won the Claret Jug: on that July night in 2011 the Champion Golfer of the Year presented the gold medal he had won the previous day at Royal St George’s to Philip Tweedie, the captain of Royal Portrush, so that it could be showcased alongside that of Fred Daly, the 1947 champion, in the clubhouse.

For years Clarke had often looked at Daly’s medal and used it to inspire dreams of his own.

Later that night there was talk, maybe even of an idle nature, which would soon gather legs. It was of the possibility of golf’s oldest Major championship – which had been held on the links in 1951, when it was won by Max Faulkner – once again being held on the Dunluce links.

And when the Irish Open, the first sell-out on the PGA European Tour, was an unqualified success in 2012, that possibility edged ever closer to probability.

The Royal and Ancient – more often than not abbreviated to the R&A – is the St Andrews-based body which has the responsibility of staging The Open Championship, and Peter Dawson, the chief executive at that time, must have had his ears burned as Clarke, Rory McIlroy, Graeme McDowell and Pádraig Harrington, all Major champions, all talked of how great it would be if and when it could be held again at Portrush.

Yet Dawson listened. And in the end mountains were indeed moved. But only after a series of brave moves.

By George O’Grady, then chief executive of the European Tour, to take the Irish Open there and enabled the course to showcase itself. By Dawson and his successor at the R&A, Martin Slumbers, to step forward rather than step away.

And, indeed, by the Royal Portrush members who agreed to a course upgrade – overseen by Martin Ebert – which necessitated the loss of two holes, the 17th and 18th, and the development of two new holes to create the space required for the staging of such a championship.

While it was very much been a team effort from the host club, two people in particular have carried a load: Wilma Erskine, who is set to retire in the autumn after serving 35 years as secretary manager, and John Bamber, the chairman of the club’s Open Championship committee. They would be the public faces of the club’s bid to stage the championship on its turf.

Of bringing Royal Portrush back onto the British Open rota – joining a list that numbers St Andrews, Royal St George’s, Royal Liverpool, Carnoustie, Muirfield, Royal Lytham and St Annes, Royal Birkdale and Royal Troon – to stage next week’s championship, Clarke observed: “I played a lot of my golf here and I lived here and I was a proud member here. Did I think we would get through the dark times that Northern Ireland has had to get the biggest and best tournament in the world? I’d be very foolish to say ‘yes’. Nobody could foresee that coming about during the bad old days, but to see how far we have all come, how far we have moved this part of the country on, it has been brilliant.”

The economic benefit of the week for the region is huge, estimated at €132 million (£120m), with this year’s championship the first in its history to have the sold-out signs up for all four championship days and only a limited number of tickets left for some of the practice days.

With all of the world’s top golfers playing, this 148th British Open is the biggest international sporting event ever staged in Northern Ireland, while the only comparable golf tournament held on the island would be the Ryder Cup at The K Club in 2006, which a subsequent Deloitte report estimated reaped economic dividends of €143 million for the economy.

In global golfing terms, the British Open is a bigger deal than even the Ryder Cup, a two-team matchplay event of Europe against the United States, that is played biennially. Indeed, the best field ever assembled for a tournament in Ireland was the WGC-AmEx at Mount Juliet in 2002 when 49 of the world’s top 50 players competed in an event where Tiger Woods was a wire-to-wire winner.

But this is Major, as they say. Players determine their careers based on the Majors and there are no financial inducements, no appearance fees, for this championship. Okay, there’s the matter of almost €2 million for the winner, but the real prize is for the champion golfer to have his name engraved along with all of the game’s greats on the base of the Claret Jug.

For Royal Portrush things have come a long, long way since an American golfing tourist was considered a rare sighting. Erskine recounts the story of just one American three-ball played in the whole year of 1985.

“We were so excited we put a big circle around their names in the diary and marked it ‘USA’. The Troubles were still going on then and nobody wanted to visit. There was an economic downturn too.”

That year the club took £35,000 in green fees. Last year that figure came in at £2.2 million. “When Americans [contact] for tee times, they don’t ask which day they can play, but which year,” said Erskine of how times have changed.

Next week is a future that few in the darkest days of the Troubles could ever have envisaged. And beyond next week is a future that holds out the promise of the championship returning to Royal Portrush. It is back on the rota, and the near-250,000 spectators anticipated to walk the links for this 148th staging could yet make this the greatest of them all.