Who is the only golfer to win the British Open outside Britain? 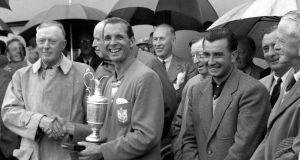 For 68 years, he has been the answer to one of golf’s greatest trivia questions: who is the only golfer in the history of the game to have won what some call the “British Open” outside Great Britain?

But time is short for the late Herbert Gustavus Max Faulkner. Next week the Englishman will have company when a second man lifts the Old Claret Jug towards the Co Antrim sky and is acclaimed “champion golfer of the year” at Royal Portrush.

Which will be a new experience for Faulkner, an endlessly eccentric character who was always one-of-a-kind, both on and off the course.

“Max was a magnificent ball-striker, maybe one notch down from the very best,” says Sky television commentator Ewen Murray, who, as a teenager, partnered the then 57-year old Faulkner in his last European Tour event, the Sumrie Better-ball at Blairgowrie in Scotland. “He was a lovely character to the end, softer when he stopped drinking. But always a bit of a card.

“Compliment him on a good drive and he would say, ‘I gave that a right fourpenny one.’ I never understood that. He used a lot of cockney rhyming slang. A four-iron was a ‘Dorking Hall.’ ‘Meat and vedge’ was a wedge. ‘Tom mix’ was a six. A cranky old woman was a ‘boiler.’ He was such fun to be around.”

Even the week in which Faulkner marched a little unsteadily towards the biggest win of a career that contained 18 victories and five Ryder Cup appearances for Great Britain & Ireland was marked by his innate ability to be different. During the four days of practice at Royal Portrush in which the trio played at least 36-holes each day, Dai Rees and Ken Bousfield had close-up views of Faulkner’s ineptitude. Before every round their friend was granted a three-hole start - and each time he was beaten “out of sight.”

“His chipping was nervous and weak and his driving was right off,” said Rees. Which was a regular bugbear. Earlier that year, the Australian press had christened Faulkner, ‘Insecticide Max, the human spray,’ so wild was he with the longest club in the bag.

None of which bothered Faulkner. Perversely, he was convinced that the 1951 Open was going to be his, to the point where - according to son-in-law Brian Barnes - he signed a golf ball just prior to the final round, “Max Faulkner, Open champion 1951.”

Whatever, Faulkner was proved right - eventually. Armed with a six-shot lead after 54 holes, he struggled a little over the closing 18. In almost constant rain, he went to the turn in a steady-enough 37, a trend he maintained until the 16th hole on the back nine. It was there he faced his real moment of crisis, hooking his drive close to the out-of-bounds fence that ran alongside the left side of the tough par-4.

“I watched Max hit his approach to that 16th green, when he conjured a wonderful shot from close to the wire fence,” says Peter Alliss, who as a 20-year old missed the cut in his British Open debut, shooting rounds of 69 and 86. “He went down the shaft on a 3-wood and scuttled it onto the green. He played with the most awful clubs. None of them matched. He had two drivers, one was a Wilson with a laminated head. The other had a limber shaft and a shallow face. He used that off the fairways. He had a lightweight putter made of stuff he could have picked up off the beach. It was basically a bit of aluminium with a shaft stuck into it.”

When Faulkner concluded his final round of 74 with a dropped shot on the 18th, only one man out on the course had a chance to beat him, Tony Cerda. Five pars over the closing holes would see the Argentine win by a shot. But it wasn’t to be. The tough par-3 that is “Calamity” cost Cerda a stroke. And when he made a double-bogey six at the aforementioned 16th, the chase was all but over. A 4-4 finish left Cerda two-shots shy and alone in second place.

That day was to be the peak of Faulkner’s golfing life, but he remained competitive until the late 1960s, winning the Portuguese Open in 1968. His behaviour as he aged, however, became more and more erratic, veering from humorous to mildly disturbing. Late into the night of that Portuguese Open victory, “Mad Max” was to be found in a local restaurant.

“Max insisted on going round all the tables to show everyone his trophy,” remembers Barnes. “He went around introducing himself to everyone. Which was fine until he got to the last table, one populated by Germans. Now, when Max was pissed, that was like a red rag to a bull. He grabbed one of the guys and tried to hit him. Tables were everywhere.

“We got Max outside and put him in the car. But when we turned round, he had gone. Then a few seconds later he reappeared. Minus his shirt, he was going to take on all comers.”

On the other side of the Faulkner legend, his career was marked by an uncommon generosity of spirit that mitigated to a large extent his propensity for what would, in the 21st century, be viewed as behaviour devoid of political correctness. Over the years he helped raise thousands of pounds for cancer research, the result of countless Sunday exhibition matches played alongside the likes of Alliss and Neil Coles.

Once, on a hot day in Warrington, a member of the gallery helpfully provided what appeared to be a glass of lemonade.

“It was laced with vodka,” recalls Coles. “The following weekend we were due to play another exhibition in the same area. On the Saturday morning Max rang me. He hadn’t been home since the previous Sunday and could I pick him up? He was incapable of driving. When I arrived he was wearing a fur hat. Someone had sold him a box of those.”

“Max could be crude and rude on occasion, which did not go down well,” adds Alliss. “He passed off as banter things that today might get him arrested. He was outrageous. And he never seemed to put on weight, even as he got older, despite drinking endless cups of tea with mountains of sugar.

“At the end it all got a bit sad. His clothes got a bit grubby. You could see wear and tear and where his right hand had gone into the pocket of his trousers for the tees countless times. He needed to send it all to the cleaners more often. He was like a stately old home living out his days in a decaying elegance.”

Still, for all his unorthodoxy, Faulkner will never be forgotten. And, no matter who wins the 148th British Open this week, he will forever be the first to do so on a course outside Scotland or England. Hardly the worst epitaph.