Before Tiger, there was JD, the man who did it his way 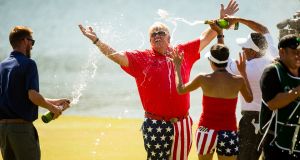 John Daly of the United States is sprayed with champagne at the 18th green following his victory at the PGA Tour Champions Insperity Invitational at The Woodlands Country Club in Texas. Photograph: Darren Carroll/Getty Images

Ironic, isn’t it, that John Daly should steal a march on Tiger Woods. Because, before there was Tiger, there was JD, the “Wild Thing”, the man who did it his way.

Before there was Tiger, John Patrick Daly was the one who moved the needle, the man who gripped it and ripped it and produced a generation of copycats who wanted to smash the ball as long as they could.

So, at a time when nobody knows when or if Tiger Woods will play competitively again, Daly has returned to winning ways. Okay, it’s not on the main tour . . . . but there is something about Daly’s maiden win on the Champions Tour – winning the Insperity Invitational – that provokes a feel-good mood in golf, that if he can win again then there is hope for everyone.

For sure, Daly’s win – on a circuit where Bernhard Langer has been the dominant player for the guts of a decade – is one that gets you to sit up and take notice pure and simply because of who he is, a player who is not cut from the same cloth as anyone else and someone who takes the unconventional route in life and not just in playing the game.

We’ve had our share of John Daly in this neck of the woods. A regular at Irish Opens through the years – from that first time at Druids Glen in 1998, and subsequently at Baltray, Fota Island and Royal Portrush – Daly, a two-time Major champion who first burst onto the scene when winning the US PGA in 1991, has captivated us for being different.

Of course, it hasn’t been plain sailing by any means, with his issues with drinking and gambling. In his book, My Life In and Out of the Rough, Daly claimed to have lost $50 million gambling, including one day spent at $5,000-a-go slot machines in Vegas where $1 million was washed down the drain in one abject sitting.

The image of Daly bending down to kiss the Arnold Palmer-logoed umbrella which had been painted on the turf on the 18th hole as he claimed victory in the Insperity on Sunday is one that shows the other side to him.

Under that weathered skin, there lurks a sentimentality that endears him to us and which is why he, in his prime, got fans to watch golf. As much as Langer has been dominant on the circuit, Daly’s arrival as a champion again –it was his first win since the Buick on the main tour in 2004 – will provide a different sort of impetus for the seniors circuit, even if there is no guarantee that he will contend each and every week.

There was also an honesty from Daly in the words he spoke afterwards.

“For me it’s like, you know, some guys come out here and win right off the bat, get the monkey off their back . . . . but now I can say I’m a champion on the Champions Tour, which is really cool and hopefully I can keep this confidence going.”

Daly is relevant again, and perhaps so too the Champions Tour again. Just as he invigorated the golf circuit with his arrival out of the blue back in winning the PGA in 1991 and later adding the Claret Jug (British Open) to his Major CV, Daly’s win resonates because of who he is, a man who deviated off the highway to explore the byroads and who has again found his way back.

Gavin Moynihan will be aiming to make it back-to-back successes on the EuroPro Tour when he tees up in the Great National Hotels Irish Masters at the Des Smyth-designed course at Ballykisteen in Co Tipperary this week.

The developmental tour is a pathway to bigger things, offering as it does a number of full Challenge Tour cards to the top players at the end of the season.

The Dubliner’s win in the season-opening Lookers Championship – where he edged out Dermot McElroy – means he is currently top of the Order of Merit and has taken a first step towards a possible £250,000 jackpot which is on offer to any player who manages to win four tournaments in the season.

Naturally, there is a strong Irish presence in the field at Ballykisteen . . . . but an interesting addition for this tournament is Corkman Niall Turner, who is a regular on the Asian Tour circuit.

There are three Irish players competing in The Players Championship at TPC Sawgrass, the flagship tournament on the PGA Tour: Rory McIlroy, playing for the first time since the Masters and for the first time as a married man, is joined in the field by Shane Lowry and Graeme McDowell.

There are four Irish players competing in the Portugal Open, a dual badge event on the European Tour and the Challenge Tour: Gary Hurley, Ruaidhri McGee, Michael Hoey and Chris Selfridge.

“Off for a weeks practice. Next up for me is wentworth, US Open qualifier, and Nordea Masters. #LifeOnTheRoad” – Paul Dunne and Michael Hoey were on site for the GolfSixes as alternates but didn’t get to play. The Greystones golfer – currently 22nd in the Race to Duba standings – won’t have any waiting to do on his next outing, the $7 million BMW PGA Championship at Wentworth later in the month as he is guaranteed his spot in the field.

“Back on the range and ready for next week’s @THEPLAYERSChamp” – Rory McIlroy– post-honeymoon – posts a video hitting shots on the range ahead of his return to competition at TPC Sawgrass.

“Thank you all” – John Daly keeps it short and sweet after his first win on the PGA Champions Tour in the Insperity Invitational.

Q. A and B are playing C and D in a four-ball match. At one hole C and D hole out and their better-ball score is 4. A, who had marked the position of his ball and lifted it, has a putt for a 4 but he mistakenly thinks B has scored a 4. Accordingly, A walks off the green, leaving his ball-marker on the green.

B immediately advises A that he (B) scored a 5. So A returns to the green, replaces his ball and holes out for a 4. C and D claim the hole on the ground that A cannot come back and putt after walking off the green, thinking his partner had halved the hole. Are C and D correct?

A. No. Since A had not waived his turn to putt and there was no undue delay, A was entitled to proceed as he did. If, however, A had not left his ball-marker on the green, and therefore the position of his ball was no longer marked, he would have incurred a penalty stroke under Rule 20-1 and would no longer have had a putt for the half.