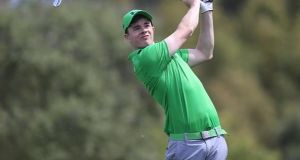 Rafferty, a quarter-finalist in the recent West of Ireland Championship, was one of only three Irish players to make the cut at the Lancashire venue. He finished an excellent week by adding rounds of 75 and 73 to opening efforts of 76 and 71 to finish seven behind winner Singh Brar on 15-over par.

Singh Brar opened with an excellent 68 and added rounds of 73, 72 and 75 to finish two ahead of Strickland with Jack Burnage - two of the in-form players this season - third on 11 over.

Singh Brar, Strickland, Brunage and Rafferty are all in the field for the Flogas Irish Amateur Open, which begins at Royal County Down on Thursday.

Grant best of the Irish at Wales open

Gemma Clews (Delamere Forest) must have clinched a place in the GB and I Vagliano Trophy team for Italy in June after her five-stroke victory in the Welsh women’s open amateur championship at Ashburnham. Clews returned improving scores of 75, 73 and 71 for a level par total of 219 over a testing links course in which the CSS was 80, 76 and 77.

The Naas ace returns to the scene of his breakthrough victory along with fellow Walker Cup panelists Paul McBride (The Island), Colm Campbell (Warrenpoint), Robin Dawson (Tramore) and Alex Gleeson (Castle) while Whitehead’s John Ross Galbraith - the third highest ranked Irish player in the World Amateur Golf Ranking but not yet a member of the Walker Cup preliminary squad- completes the Ireland line-up.

O’Rourke’s wire-to-wire triumph in 2016 was the second success by an Irish player at St Andrews following that breakthrough win for Rathmore’s Alan Dunbar in 2009, Martin Sludds (1982) and Tom Craddock (1969).

Tullamore’s Stuart Grehan, currently the highest ranked Irish player at 40th in the world, is unavailable for St Andrews because he will be helping Europe defend the Palmer Cup in Atlanta that week.

However, Grehan is included in the GUI’s six-man squad for the Brabazon Trophy at Woodhall Spa, from May 25th-28th alongside O’Rourke, Campbell, Dawson, Gleeson and The Island’s Kevin LeBlanc

The winner and the leading Under-18 finisher in this year’s Northern Ireland Amateur Open will qualify for the NI Open, presented by Modest! Golf at Galgorm Castle from August 10th-13th. The Northern Ireland Amateur Open, sponsored by Specsavers Ballymena, has become one of the province’s standout amateur championships since its inception in 2009.

“Walker Cup player Cormac Sharvin won in 2012, Ireland internationals Reeve Whitson (2010) and Tiarnon McLarnon (2015) also feature on the roll of honour, while Ballymena’s Dermot McElroy, won in 2013 and went on to finish tied ninth at the NI Open and finish as leading amateur.”

Former winners such as Sharvin and McElroy will return to Galgorm to compete as touring professionals, illustrating the role tournament golf at Galgorm plays in the development of Ireland’s young amateurs and professionals.

This year’s Northern Ireland Amateur Open will also guarantee a place in the NI Open for the leading under-18 player, courtesy of an invite from Modest! Golf, as they continue to provide playing opportunities for young amateurs just like they did by inviting teenage sensation Tom McKibbin to play last year.

Defending champion Colm Campbell has been drawn with world number eight Connor Syme and American Stewart Hagestad for the first two rounds of this week’s Irish Amateur Open at Royal Co Down. The Warrenpoint man goes off at 8.25 on Thursday with huge interest in how world number 101 Hagestad, the leading amateur at the recent Masters Tournament, fares on one of the world’s greatest links courses.

Eight of the world’s top 100 ranked amateur golfers are taking part - Hagestad is 101st - headed by British Amateur champion Scott Gregory (No 6), with the leading 50 and ties after three rounds qualifying for the final round on Sunday next.

Co. Louth Golf Club has produced generations of elite golfers, none more so than Clarrie Reddan and Philomena Garvey. Renowned as some of Irish Golf’s most successful players, the Baltray natives will this year be honoured at the Irish Women’s Open Strokeplay Championship.

Clarrie Reddan (nee Tiernan) was born in 1916 and boasted a career that included ninety International appearances between 1935 and 1955, an Irish Ladies Close title, two Curtis Cup appearances and a runner up at the British Ladies Amateur Championship in 1949.

Philomena Garvey, 10 years Clarrie’s junior, initially found interest in the game through her brothers and while caddying for Clarrie where it is said she had a terrific eye for green reading and excelled at club selection. In her own right, Philomena went on to complete a superb career in golf.

British Ladies Amateur Champion in 1957 and winning the Irish Ladies Close Championship no less than 15 times, she was selected on every GB&I team for the biannual Curtis Cup from 1948 to 1960, however she famously withdrew from the 1958 team in protest to use of the Union Jack as a major part of the Team Crest.

These two legends of Irish Golf have inspired many subsequent generations at County Louth Golf Club, which will become home of the Irish Women’s Open Strokeplay Championship - Clarrie Reddan and Philomena Garvey Trophy, for the next 5 years.

“We are delighted to be able to honour Philomena and Clarrie at the Irish Women’s Strokeplay at Co Louth, as two stalwarts of the game they are an inspiration to all competitors who will play for the Trophy come Friday morning and the next number of years,” said ILGU Chief Executive Sinead Heraty.

Seventy-nine elite golfers will tee up on Friday in a bid to become the 2017 Irish Women’s Open Strokeplay Champion.

The 2016 Champion Olivia Mehaffey will be unable to defend her title as she is on collegiate duty for Arizona State, however a host of national and international players will be sure to provide a spectacle of golf over the weekend.