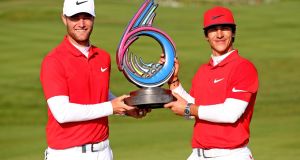 England’s Andy Sullivan and Chris Wood called for more players to be given one-shot penalties and “named and shamed” for slow play following the European Tour’s inaugural GolfSixes tournament.

The six-hole team event – won by Denmark’s Thorbjorn Olesen and Lucas Bjerregaard – featured a shot clock on the fourth hole, with players initially allowed 40 seconds to hit their shots in the first two group matches, before that was reduced to 30 seconds for the remaining sessions.

American Paul Peterson was the only player to incur a one-shot penalty for exceeding the 40-second limit in his side’s draw with Wales, which ultimately cost the left-hander and partner David Lipsky a place in the quarter-finals.

The reduction from 40 to 30 seconds came at the request of the players and, speaking after England’s 2-1 quarter-final loss to Italy, Sullivan said: “We had such a long time, we had ages and it’s embarrassing when we’re playing on the Tour and it is taking so long.

“I personally think they need to be stricter with it. This week everyone was quicker because they knew as soon as it [the shot clock] went to zero they were getting a shot penalty. In a normal event you have that little bit of leniency.

“It’s highlighted you really don’t need 40 seconds. It proves everyone can play that quick – it’s just the fact that when it’s not on them, they won’t. It’s up to the tour to push that and get on them.”

Wood felt that Peterson would have been “humiliated” by the penalty and added: “I think that’s quite a lot to do with it: naming and shaming. There’s too much leniency, I think. Players are to blame. You hold your hands up there, but referees can be stronger, I think.”

Denmark recovered from an early deficit to beat Australia 3-1 in the final, with Sam Brazel and Scott Hend both driving into the water on the fourth before Olesen converted Bjerregaard’s superb tee shot on the fifth.

Olesen, who won the World Cup with Soren Kjeldsen last year, then enjoyed a lucky break when his approach to the last stopped inches from the water and Australia were unable to find the birdie required to potentially force a play-off.

“It’s gone pretty well for me in team events recently, so I was hoping for a win, and Lucas played great, especially the last six holes,” Olesen said. “It’s been a great week and I’m really happy to hear it’s coming back because we really enjoyed it.”

Earlier in the day, England lost to Italy when Wood drove out of bounds on the last and Sullivan’s tee shot found a fairway bunker to give the upper hand to their opponents, who took full advantage with a brilliant approach by Matteo Manassero to 10ft.

When Wood missed from 20ft for birdie the Italians had two putts to win, but Renato Paratore ended the match in style by holing for an eagle three.

Scotland’s Marc Warren and Richie Ramsay needed just four holes to beat Portugal in their quarter-final thanks to two birdies and an eagle, but then failed to produce a single birdie in a disappointing semi-final loss to Australia.

After losing the second hole to a birdie, the Scots were gifted a lifeline when Australia contrived to three-putt the fifth, but Warren drove out of bounds on the last and then pushed his approach into the water to effectively seal his side’s fate.

“We just didn’t get the scores on the board,” Warren said. “It was there for us to win. I thought my tee shot might not have been too bad, but then I had to go in with a three wood, and to put Richie in that situation was pretty disappointing given the way we’ve played.”

Asked about the tournament as a whole, Ramsay added: “It’s really good. It’s like everything – we need a bit of traction. We’ll go away and tell people what it was like. We take this first concept and refine it so it becomes really, really attractive for folk coming in.”

Scotland beat Italy in the third/fourth place play-off via a nearest-the-pin contest on the second extra hole.