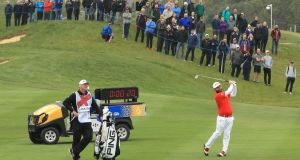 Andy Sullivan hits his second shot on the fourth hole with the shot clock in the background during the Group A match between England and India on day one of GolfSixes. Photo: Andrew Redington/Getty Images

Andy Sullivan believes GolfSixes could play a major part in the future of the game after helping England reach the quarter-finals of the inaugural event.

Sullivan admitted he and Chris Wood had “dodged a bullet” after scraping a draw in their first group match when opponents India three-putted the final hole.

But after another draw with Denmark left the pre-tournament favourites needing victory against Holland to guarantee their progress, the Ryder Cup team-mates combined to birdie five of the six holes for an emphatic 4-0 win.

“We left ourselves with a little bit of work to do, but got the job done,” Sullivan said.

“I know we’re having a good time out there, but you still want to represent your country well. We’re both pretty patriotic and when we go out there we want to do the job.”

Under the greensomes format, both players tee off on each hole before selecting the best shot and playing alternate shots thereafter. One point is awarded for each hole won, with teams claiming three points for a win and one for a draw.

Each of the six holes has its own theme, including a long-drive contest, nearest the pin and a shot clock, where players faced a one-shot penalty for exceeding the 40-second time limit.

The players had emerged through a cloud of smoke as they were introduced on the first tee and Sullivan went so far as to engage in an enthusiastic chest-bump with the mascot.

“I really enjoy letting myself go and having a good time,” the former supermarket shelf-stacker added.

“This sort of thing is perfect for me where you can interact with the crowd and really get them going.

“Golf can benefit from that and it’s something to bring the fans closer and show we are not all robots and we actually have a personality.

“The atmosphere from the start has been brilliant, and there has been a lot of home support which is great for us. Hopefully that can push us on tomorrow and I think this can really be something big in the future for golf. You won’t get away from the traditional 72-hole (events), but I think a few more events like this could really transform golf.”

Wood admitted he could “do without” some of the bells and whistles, but would like to see the format exported to other parts of the world.

“Keeping it in cities would be a good idea but I am definitely up for taking it around the world a little bit — imagine this in Manchester, New York, Paris,” he said.

England will face Italy — represented by Matteo Manassero and Renato Paratore — in the last eight, with Scotland taking on Portugal after both sides qualified with a game to spare by winning their first two matches.

Scotland beat Belgium 3-2 thanks to an eagle on the last, with Marc Warren and Richie Ramsay then producing another eagle and three birdies to defeat Spain by the same score.

“We were in the Group of Death and knew we would have to play well to finish in the top two,” Warren said.

“To qualify before our final game was definitely a bonus.”

A 3-1 defeat to Thailand in the final game meant Thailand topped the group and will face Australia in the quarter-finals, with Denmark taking on France.

The only penalty for slow play was incurred by American Paul Peterson and it proved costly as the left-hander and partner David Lipsky lost the hole and could only draw their match with Wales.

And after beating Portugal in their final game, the American pair finished just two points behind Australia with a better holes-won differential.

“I kind of figured at least one of the caddies or somebody would say ‘You’ve got 10 (seconds), or some kind of countdown,” Peterson said. “I had no clue. I feel like I let the team down.

“We played so well, birdied the first three holes and then obviously got that penalty.”