John Catlin’s winning cheque of less than €200,000 significantly down on recent years 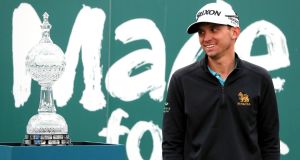 Given the unquestioned quality of John Catlin’s game, perhaps history won’t decree any need for an asterisk to be applied beside his champion’s name on the Irish Open trophy. His win means his names goes alongside legendary players of the game. Seve. Faldo. Langer, Woonam. Montgomerie. Harrington.

Still, the fact of the matter is that this latest edition was one downgraded, through no fault of its own in this pandemic age. It meant that Catlin earned a greatly diminished cheque for €199,750 for his win. From 2017 to last year, it was a Rolex Series event – won by Jon Rahm in 2017 and 2019, on each occasion the Spaniard picking up just over €1 million in prizemoney, while Russell Knox’s win in 2018 saw him collect €998,000.

Rory McIlroy, world number three at the time, won the 2016 edition at The K Club (when he was tournament host and a year before it became a Rolex Series event) and earned €666,660 for his efforts.

In fact, the last time that a player won less than Catlin for securing the grand old championship was when Colin Montgomerie won at Druids Glen in 1997. Monty won €160,000 that time. The hope is that the DDF Irish Open will, next year, return to its rightful place as one of the European Tour’s showpiece tournaments.

Golf courses to close under Level 5; Andy Farrell names team for Italy clash 07:45
Connacht coping with Covid case and injuries ahead of trip to Edinburgh 07:00
Dundalk quietly confident ahead of Europa League opener 06:00
Molde unlikely to see themselves as also-rans as they face Dundalk 06:00
Measured approach sees Ireland women’s rugby squad taking shape 06:00
Here is your handy guide to sport on television this week