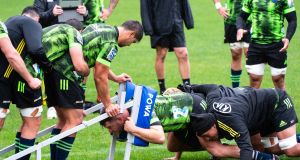 Hurricans train in New Zealand ahead of their return to action. Photo: Elias Rodriguez/Inpho

After last week’s address by IRFU chief executive Philip Browne the message is very clear – rugby needs to be played this year to avoid huge financial problems. One of the potential solutions to increasing the number of matches and maximising TV and advertising revenue – with no matchday income available – is to play a home and away Six Nations. However, Gerry Thornley writes in his column this morning that such an idea could be the ruination of the tournament. “The Six Nations need only look at the Rugby Championship as a cautionary tale or, even more so, the once almighty Super Rugby. While expansions and reaching into new territory are commendable, both have suffered for the constant tampering,” he writes. Meanwhile, 10-year Aviva Stadium ticket holders are seeking clarity over their payments during the likely prolonged stretch of time when fans won’t be allowed at matches. A third and final payment of €8,7000 is due by June 1st and the IRFU said they will be correspnding with ticket holders soon.

Moving on to soccer and the return of the Premier League looks to be inching closer with yet another vote set to take place this week. Today the clubs will be able to examine the rules for a return to contact training with a vote on the matter set to take place tomorrow. One area of uncertainty that remains over the protocols is the rules it will set on quarantine, specifically regarding players who have not failed a test but have come into contact, while training, with someone who has. Meanwhile, with the Football League also looking to make a return there are reports that crowd noises may be piped into grounds to create some sort of atmosphere.

1 Coronavirus: No further deaths reported as doctor warns second wave ‘weeks away’
2 Spread of invasive false widow spider ‘makes bites more likely’
3 Two brothers die in ‘tragic accident’ while diving in Co Tipperary
4 Ireland could eliminate Covid-19 ‘within months’ with tighter restrictions
5 Irish family stuck in Cyprus: ‘We hope our flights home are cancelled’
6 Leaving Cert student told he is not eligible for predicted grade
7 ‘This is simply disgusting’: Holidaymakers struggle amid mixed messages
8 Ruth Negga: ‘People who say they don’t consider skin colour... are you f**king blind?’
9 Close businesses selling alcohol to on-street drinkers, restaurant group says
10 Recruitment plan for Defence Forces ‘allowed to fail’
11 Covid-19: Revellers flouting restrictions may face tougher controls
12 Why gift a son now if it eats into his tax-free inheritance threshold?
13 Dig for remains of Red Hugh O’Donnell in Spain reveals 16 skeletons
14 Bobby Storey: The IRA's planner and enforcer who stayed in the shadows
15 Fontaines DC: ‘We’ve no licence to speak for Ireland’
16 Pierce Brosnan: ‘I was an only child from a fractured family’
17 Coronavirus: Spain imposes second local lockdown after flare-ups
18 If hairdressers ran our schools every child would be going back in September
19 Ryan confirms travel ‘green list’ will come in after July 20th
20 Satay noodles: An antidote to bland pasta salads
21 Kanye West says he will run for US president in 2020
22 Flights abroad ban could last all summer
23 Fintan O’Toole: Future of the American republic is in grave danger unless Trump is defeated
24 Patrick Freyne: You endearingly sentimental sociopath, I’ve just the show for you!
25 Coalition will last longer than sceptics predict
26 The joy of jollof: A beginner’s guide to nutty, spicy, aromatic west African cuisine
27 Have arts and culture been demoted again?
28 There is nowhere I’d rather wait out coronavirus than Uganda
29 Breda O’Brien: How many other Baby Christophers are there?
30 TV Guide: 25 of the best shows to watch this week
31 Toppling statues is just the beginning: How to make Irish culture less racist
32 I think my boyfriend broke up with me because I was diagnosed with herpes. I’m devastated
33 Vacation once again: A night at a campsite, a five-star hotel and a full-Irish B&B
34 ‘I spent lockdown renovating a little piece of heaven’
35 World View: Ireland weaponised by London in Brexit talks
36 Ictu warns Varadkar of ‘consequences’ for construction workers
37 ‘Where are you really from?’: Growing up black in Ireland
38 Electric car drivers will soon have to pay to use ‘slow’ chargers
39 Solar giants Jupiter and Saturn are dominating the night skies in July
40 Government to avoid ‘cliff-edge’ on Covid-19 payment changes
Real news has value SUBSCRIBE