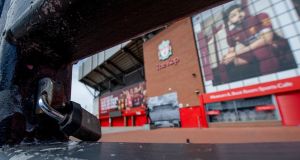 Players and managers will at last be able to examine the Premier League’s rules for a return to contact training on Tuesday, just 24 hours before they are put to a crucial vote.

On Sunday night British government advice was updated to allow elite sports to move to “stage two” of a return to play. The advice is broad, setting the parameters within which sports can operate. The crucial details on how precisely to minimise risk must be devised by governing bodies.

The Premier League has been closely involved with the drafting of government policy and will now present its own protocols to the people who will be expected to enact them.

The league hopes that a successful week of training and just eight positive results from 1,744 Covid-19 tests to date will make players and coaching staff confident in facing the challenges to come.

One area of uncertainty that remains over the protocols is the rules it will set on quarantine, specifically regarding players who have not failed a test but have come into contact, while training, with someone who has.

The advice of Public Health England, which the Premier League says it is following, would require the player to isolate for 14 days. With training groups to consist of upwards of six members, one positive test could have substantial knock-on effects.

Once the protocols have been shared with players and managers, they will quickly be put to a vote by clubs. There will be great pressure to reach an agreement as the shareholders meeting, originally planned for Tuesday but pushed back to Wednesday due to a delay in the guidance, will be followed by another meeting on Thursday aiming to resolve some of the myriad other issues that face the league.

Among the debates at the second meeting will be the issue of curtailment and how best to resolve the season if, despite the efforts made, it cannot be completed. This will open the possibility of ending the season without relegation, though such a measure is not thought to be supported by the majority of clubs.

Also on Thursday the subjects of TV scheduling and rebates owed to broadcasters are likely to be resolved.

Both Sky and BT have asked the league to return some of the money they paid for broadcast rights due to the disruption of the season and their subsequent loss of subscribers. Clubs are expected to be asked to approve measures that could see the companies repaid £350m.