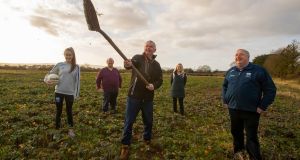 News of the acquisition of a dedicated venue for Waterford’s women footballers is further recognition of the need for additional facilities within the game.

Situated at Ballinroad, just outside Dungarvan and beside the Waterford Greenway, the property is to be developed into a home for football in the county.

In Armagh, the county’s footballers are in the process of developing a facility of their own as well – McKeever Park in Killean. Already a pitch has been laid and there are ambitious plans to turn the venue into a centre of excellence and home for the county football teams as well as clubs.

Armagh chair Sinéad Reel acknowledged the assistance of Silverbridge GAA club in providing its amenities in recent years for the women footballers but regretted the continuing refusal of Sport NI to recognise the game.

“The biggest stumbling block is financial and we have to raise all of our funds because, whereas Sport Ireland are supportive of our game, Sport NI do not recognise it.

“We’ve been knocking on that door for a couple years looking for help so basically everything we’ve done has been fund raised and supported by sponsors.

“Ulster Council (of the GAA) went down that road about 10 years ago to try to secure recognition because football, hurling and camogie all have it but they were turned down even after it went to arbitration. I’m baffled as to why the fastest growing sport in the country is treated like this and I’m really hoping that it changes.”

The stance is all the more surprising given the status of counties in the province within the game. Just last November Armagh had a memorable battle with eventual four-in-a-row winners Dublin in the All-Ireland semi-final and went on to win the Ulster title.

The property is held on a long-term lease with an option to buy and was formerly used by GAA club St Michael’s. Acquired just over a year ago, it has seen £120,000 invested in it already.

“The pitch has been used for the county team to prepare,” according to Reel. “The long-term plan is that in three or four years we will have brand new, state-of-the-art dressingrooms and facilities.”

Waterford fundraised to acquire their property and will be able to develop it with the proceeds of the sale of nearby land, which will be split 70-30 between the county and the Kilgobinet club.

The development land was gifted to the county’s women footballers and the club by a benefactor. Known locally as the Duckspool site, the land’s owner has made them the beneficiaries of its sale when it secures planning permission.

Work on the field is expected to commence by the summer. A pitch with a spectator stand, changing rooms, coach and car park and a full six-lane running track around the perimeter of the pitch are planned.

The facilities will be available for use to all county and club teams across all grades.

Lions tour will not take place in Australia this summer 11:39
England all in a spin once again as India seal the series 11:00
Kilmacud Crokes and a 25-year boom in women’s football 10:00
The story behind the amazing growth of women’s Gaelic football 10:12
Ulster’s new breed of backline boys can return silverware to Belfast 06:00