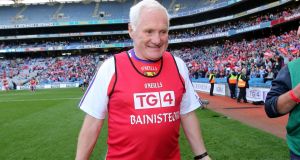 “Tough old day,” said an emotional Rena Buckley of news of the passing of Eamonn Ryan, the man who managed the Cork women’s football team to a remarkable 10 senior All Ireland titles in 11 years between 2004 and 2015, Buckley featuring in them all.

“It’s a sad time for his family, and my thoughts go out to them,” she said. “We’ll miss him fiercely in Cork, he meant so much to us all. He was such a huge personality, he was a great friend to us, he was the leader of our group, a genuine person who was always true to his values.”

In Mary White’s book ‘Relentless’, the brilliantly told story of that all-conquering Cork team, Ryan, who died on Thursday at the age of 79, talked to her about his belief that successfully coaching a team was akin to running a thriving business.

He recalled reading an article about the success of Kelly’s Hotel in Rosslare and how the owner urged the staff to give their customers the best experience possible while they were there, so that they would return.

“That’s what a coach has to do,” he said, “give the players the best experience so they’ll return again and again.”

And that’s what his Cork players did during his spell as manager, they returned again and again. Partly because of their fondness for him, partly because he created the happiest and most supportive of camps, but also because he brought out the very best in them and taught them how to be winners.

Before he took up the role, at the age of 63, the Cork women had experienced no success at all, Kerry and then Waterford dominating Munster football. But throughout a coaching career, in football, hurling and camogie, he’d made a habit of instilling a belief in his players, no matter how little success they had achieved, that they could be winners.

In 1974, as a player and coach, he led his native Watergrasshill to their first ever junior county hurling title, an achievement, despite all that was to come in his career, he described as his proudest. In 1990, he managed Na Piarsaigh to their first ever senior county hurling title and in 2006 he was at the helm when Ballingeary won their first intermediate county football title. Where there was no culture of success, he created one.

Born in 1941, Ryan became immersed in Gaelic games from a young age, his first passion hurling but, as a player, it was in football, which he didn’t take up until he went to secondary school in Ballyvourney, that he prospered, making the Cork senior team in 1963. Three years later he was a corner forward on the team that took on Kerry in Killarney in the Munster final, the home side attempting to complete a nine-in-a-row. Cork won by three points, which was Ryan’s tally from the game.

A year later, he became the first player from his neck of the woods to play in a senior All-Ireland final, but Meath won out on the day. He wasn’t, though, to experience much heartache in Croke Park thereafter.

Come 1983, he helped prevent another Kerry nine-in-a-row, this time as Cork senior manager when Tadhg Murphy’s late goal in Páirc Uí Chaoimh gave the county victory by a point in the Munster final.

While the Holy Grail of a senior All-Ireland triumph proved elusive both as a player with and manager of the senior men’s team, he led the Cork minors to All Ireland success in 1991 and 1993.

By the time he took over the Cork women’s team in 2004, his coaching CV was jammed with triumphs in football, hurling and camogie at college, club and county level.

Still, this was a whole new challenge, taking over a team that didn’t know how to win. By the time he left the post, they’d forgotten how to lose.

Apart from 2010 when Cork were stunned by Tyrone in the quarter-finals. The end of the reign? “A pebble in the shoe,” said Ryan, who was never one for drama. His players often recall his calm on the sideline when they were 10 points down to Dublin with 15 minutes to go in the 2014 final. No drama. He trusted them to sort it out. And that they did.

A teacher by trade, Ryan was principal for a time in the national school in Watergrasshill. His home town club paid tribute to him on Thursday: “In school he was known as ‘The Master’ - a description fitting to the man, teacher, player and coach, all parts of his life.”

“He gave so much of his time and so much of himself to so many people, I count myself very lucky that I was part of a team that he managed,” said Buckley. “His contribution in terms of football was massive, but he taught us huge lessons in terms of our lives. Sport was just a way for him to bring you on as a person, he developed people as much as he developed players. Sport was just a small part of that. Yeah, we’ll miss him something fierce.”

3 GAA set to extend ban on intercounty activity until March