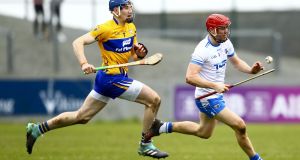 Waterford County Board officials are now adamant that Walsh Park will host their Munster hurling round-robin matches this coming May and June, before work will then immediately commence on a €7 million refurbishment project to bring the county ground’s capacity up to 16,500.

However in the meantime he said Walsh Park would be fit to host Waterford’s two home games this summer – against Clare on May 12th, followed by the All-Ireland champions Limerick on June 2nd.

“That’s no longer in question, the Clare and Limerick games will both take place in Walsh Park,” said Ryan.

“The Slattery Report has put the capacity at 11,040 people, that’s allowed, subject to some remedial work, which is already started, I believe today [Monday].

“Everything will be ready for the championship. There was an issue with a wall as well, which was in danger of falling, but that’s being taken down. There was some other remedial work, in the short term, some small health and safety things. But we don’t see any obstacle now whatsoever. It’s full steam ahead.”

After reaching the All-Ireland final in 2017, Waterford’s hurling ambitions fell considerably short last summer when they failed to progress from the round-robin phase of the Munster championship. At that stage Walsh Park was given a reduced capacity of just 8,000, deemed unsuitable for their home matches by the Munster Council.

As a result, the Waterford seniors (and minors) played their “home” games in 2018 in away venues – drawing with Tipperary at the Gaelic Grounds in Limerick, and losing to Cork at Semple Stadium in Thurles. They also lost “away” to Clare and Limerick, and this failed to progress. Fraher Field, with a capacity of some 15,000, wasn’t considered suitable either.

New hurling manager Páraic Fanning, who succeeded Derek McGrath, has also been quietly insisting that Waterford’s home games in 2019 be played at home. The Munster Council had also voted against the possibility of staging the games closer to home, possibly at Nowlan Park, as that was outside the province.

Preliminary planning permission for the refurbishment work was approved last year, but An Bord Pleanála received several submissions, two regarding traffic management issues, which have now been addressed.

“An Bord Pleanála have now signed off, we got the go ahead on Friday,” said Ryan. “All going to plan, the bulldozers will move in immediately after Waterford’s last home game. The existing stand on Slievekeale Road will be upgraded as will Keanes Road which will be a covered terrace; there will be an uncovered terrace on the northern bank. The project is also set to include four new dressing rooms, office space and shops, plus off-street parking for team buses.

“The plan is that the day after the Limerick game, we’ll start the redevelopment, the knocking and the reconstructing,” added Ryan.

“Ideally, we’re looking at 11½ months, which would have it ready for our first championship game next year (2020), against Cork. There’s very little knocking. It’s more just building up the new terrace behind the goals. And when it’s finished we’ll have seating for around 11,500, 6,500 covered, around 5,000 uncovered. And a standing terrace, covered, behind the goals, standing for another 5,000.

The cost of the project has been put at €7 million, significantly less than the now €95.8m bill facing the Cork County Board for the redevelopment of Páirc Uí Chaoimh.

But Ryan explained there’s is a far more modest project: “That’s the latest figure that was put to the clubs and the county boards, and we’d be hopeful of keeping it at that. We’re still in the process of approving that funding from all the various people involved, Government sports funding, Central Council funding, Munster Council funding, and the raise we needs to raise ourselves from within the county.

“But everything has been budgeted for, and the funding plan has already presented to the county board. That’s passed by the county board, and hopefully the job will going to tender this week.”

Walsh Park last hosted a Munster championship match in 2003, when Waterford hosted Kerry in the first round.

“We’ve needed this for a while now, and when it’s finished, we’ll have a beautiful compact stadium, 16,000-16,500. And we might only fill it twice a year, as long as this championship format continues, so it’s plenty big. The bigger the stadium the bigger the cost, and this is absolutely big enough for what we want.”

“And our manager as also been insisting all along that our championship games be played in Walsh Park this year. I believe the new director general Tom Ryan also mentioned it in his annual report, to Congress, that Waterford’s games should be played in Waterford.”

Waterford are currently top of division 1B, beating Offaly, Laois and Carlow by double-digit scores, and face Dublin and Galway in their remaining games.