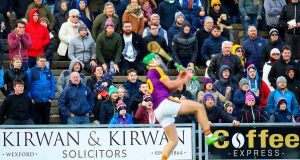 It’s getting no easier to work out quite what language the 2019 hurling league is speaking. Every time you think you have it on your ear, it throws up a dialect you weren’t expecting.

For two-thirds of this encounter at Wexford Park, it looked for all the world like a Tuesday night challenge game, the sort of no-harm-no-foul affair you get in a league with no relegation. And then, improbably, a ding-dong riot of a game broke out between two teams who looked like they were hurling for their lives.

Wexford came away with the points thanks to Aidan Nolan’s injury-time winner, stroked on the run from the 65 after Lee Chin picked him out with a smart diagonal clearance. It sent the 6,700 crowd doolally, capping off a Wexford comeback in which they made up an eight-point deficit in the closing half hour. The minute and a bit from there to the full-time whistle was the only part of the afternoon in which they led.

Though an icy gale was whipping across the pitch, you could have mistaken the scenes at the end for high summer. To say that looked unlikely when Tipp went eight points up early in the second half would set a brave new mark for understatement. A couple of rat-a-tat points from Niall O’Meara and one each from Robert Byrne and Seamus Callanan had Wexford 1-11 to 0-6 behind on 43 minutes, doubling Tipp’s half-time lead and looking for all the world like the game’s decisive statement.

But then, who can tell when it comes to this league? The tectonic endgame left you in no doubt that everyone was in it to win it. But trying to square that with the wan and shapeless opening half would give anyone a headache. Liam Sheedy conceded afterwards that there’s a strong element of phoney war about everything that happens in these games. With the best will in the world, that has to be the governing principle.

“To be honest we don’t really think about it,” Sheedy said. “We play it match by match and I think against Limerick and Wexford we went out with the intent to win the game. If you don’t it’s not the end of the world but if you asked me what is most pleasing it’s the way we are approaching them and applying ourselves. We are far from the finished article but we are 10 or 11 weeks out from where the real fun and games begin.”

The structured belligerence of the Wexford comeback when the game was a game meant they were good enough value for the win in the end. That said, Tipp probably deserved a free at the end that would have levelled it and they definitely got the pointy end of the stick from referee Colm Lyons on the balance of the afternoon. At one stage in the first half, the free count was 10-1 in Wexford’s favour – the roar that met the eventual second Tipp free was festooned with irony from the visiting crowd.

Wexford’s shooting, albeit into a strong breeze, was all over the map in that first half and with Callanan fairly assured at the other end, Tipp went in 1-7 to 0-6 ahead. Once they went four up soon after the restart, it looked like the game would have little more to say for itself.

Ian Byrne got poleaxed in laying off the killer pass but it was worth it to put Seamus Casey in on Paul Maher – Casey’s finish was low and true and just like that, Wexford had reeled off 1-2 in the space of three minutes.

From there to the end, the game was cracker. Cathal Dunbar scored a monster sideline cut for Wexford, Jake Morris came off the bench to snipe one for Tipp. But when it came down to it, O’Keeffe and Nolan were able to pop up with the last two points so that it was Wexford who breasted the tape.

“When you’re playing competitively, it’s in our nature,” said a delighted Davy Fitzgerald afterwards. “You can tell me all you want that there’s no relegation but you want to win. You get confidence from winning, let’s call a spade a spade. The idea that you can use it as a safety net is rubbish. You want to win every game you play in and I’ve been in the game a long time that’s definitely how I’d feel about it.”