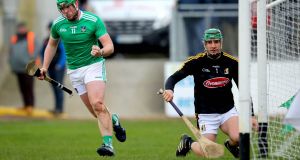 The rising graph of Limerick hurling was maintained in Nowlan Park, Kilkenny on Sunday. As All-Ireland champions and the only 100 per cent team in Division 1A, they were the form team coming into this but no matter who you are, travelling to this venue to play this county has in the past two decades exerted its own particular pressure.

It’s safe to speculate that Limerick supporters in a bumper crowd of 11,283 – having suffered the agonies of an evaporating eight-point lead going into injury-time in last August’s All-Ireland – probably took a while to feel certain about the win even though the match was arguably settled in little over five minutes before half-time when the home side was out-scored 2-3 to nil.

And so the league holders went from an encouraging, low-scoring draw at 0-7 each with nearly half an hour gone and a gale-force wind due at their backs in the second half to a daunting 0-7 to 2-10 half-time deficit.

The goals and the interval score-line maybe did a disservice to Kilkenny but their goal had been threatened and the fact that it survived was largely thanks to loose finishing and fine saves by Eoin Murphy, maintaining the alertness that kept out four Limerick goals in last summer’s All-Ireland quarter-final.

In the 34th minute, Aaron Gillane – still in the dazzling form that was such a feature of Mary I’s Fitzgibbon Cup semi-final defeat of NUIG during the week – flicked on Paddy O’Loughlin’s long delivery and Shane Dowling – starting to good effect rather than being unveiled like an emergency generator off the bench – did the rest.

After Murphy took a short puck-out, Graeme Mulcahy intercepted Tommy Walsh’s pass and got ball to Conor Boylan who crashed in the second goal. Limerick were rampant and all of the home side’s patient parsimony was being ruined in a flash.

Manager John Kiely acknowledged the benefit of the pre-break blitz but added that his team were probably better equipped to play against the wind.

“The goals came close to half-time so it was hard for them to respond and our lads took the game by the scruff of the neck early in the second half. We ran the ball well. It probably suited us playing against the wind – plenty of support runners. Overall a good team ethic and a good team effort from everyone.”

Kilkenny had opened brightly enough in what was a whirlwind initial phase with points flying over in volleys but after 10 minutes that all ground to a halt. The error-strewn, low scoring exchanges suited the home team and they weren’t behind until the 28th minute. There were also worthwhile contributions from Richie Leahy, who kept it going in the second half, and Walter Walsh, who was very busy in the first half but less influential afterwards, allowing for the fact that he and his namesake Pádraig were only returning for their first starts of the season.

They needed an old-style riposte on the resumption but Limerick went up a gear and had added four points without reply as Gillane showed great positioning and touch to take the fight to Kilkenny in a stripped-back full-forward line. His scores came from frees but he was a constant threat from play, drawing a save Murphy after flicking on a ball from Darragh O’Donovan.

Kilkenny were almost punch-drunk: Mulcahy picked up a loose ball and snapped it over the bar and a minute later a stunning team point, knitted together with a sequence of hand- and stick-passes put Barry Murphy in the necessary space to shoot over.

Buoyed by a now enormous 14-point lead, Limerick lost a bit of focus. Kilkenny are though a poker player’s dream in that they never fold a bad hand and they revived slightly – actually winning the last 20 minutes by 0-7 to 0-2, as the All-Ireland champions began to spill ball in further attempts at sweeping moves but the fact was that they never came under sustained threat of a goal.

The full-back line of Tom Condon, whose rocket-propelled breaks from the back complemented a solid defensive display, and the All Star duo of Seán Finn and Richie English were dominant.

“Tom (Condon) had really stepped up to the plate,” said Kiely. “He has an opportunity with Mike Casey injured. Nice for him to captain the team today, he offers a lot of leadership off the pitch over the last 18 months. He’s been injured quite a bit but he always brings huge leadership qualities.”  Kilkenny manager Brian Cody accepted that they had allowed too much space for their opponents’ forwards, especially Gillane.

“At times, yeah. There was a strong wind there as well which tends to make the difference. They’re All-Ireland champions; they’re a very good team. While we started off really well against a very strong wind – two goals, the timing of them in particular. But look that’s as it is. The scoreboard doesn’t lie, they were that much ahead of us at the end of the day and that’s the reality of it.

“They’re very good at it,” he said of Limerick’s inter-play. “They have developed their game very well. They’re All-Ireland champions and they’ve obviously moved on again from that. This is what their third match of the league, they’ve been impressive and got better in all their matches.”