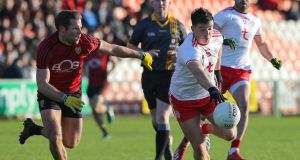 Tyrone cruised through to the Dr McKenna Cup final with a nine point win at the Athletic Grounds, where they survived a Down revival to set up a date with Monaghan.

Conall McCann and Ronan McHugh fired in the goals to keep Mickey Harte’s side on course for an eighth title in nine seasons.

Manager Harte welcomed the opportunity to have an additional competitive outing ahead of his side’s NFL opener at the end of the month.

“That’s what we like the McKenna Cup for, to get games, get game time, see new players who haven’t seen much game time at this level getting some of it, and we’re getting more games at the same time,” he said.

“And you don’t get to play more games if you don’t win the ones you’re in, so that’s the name of the game, get as many competitive matches as you can before the league starts.”

The holders were in cruise control in the opening half, opening up an 11 point advantage, but Down rallied strongly with the wind in their backs, and a Cory Quinn goal closed the gap to four, before they faltered with a man in the sin bin.

“I was very happy with the first half performance. I suppose it put us into a position of comfort that we needed to stay in it for as long as we did,” said Harte.

“But Down came back strongly, and maybe the biggest obstacle for them was losing a man. The black card cost them an awful lot, because up until that time they were really coming back into the game, and it was getting too close for comfort for us.

“But when they lost a man, we capitalised on that, and put ourselves in a strong position again.”

McCann’s goal after just two minutes set Tyrone up for a dominant first half performance, his shot buried to the bottom corner of the net from Niall Sludden’s quick free.

Pat Havern, Sean Dornan and Conor Poland hit the target for Down, but they were unable to curb their hungry opponentss, with 11 points separating the sides at the break, the holders ahead by 1-12 to 0-4.

Poland and Havern were on target again, and when Quinn finished a tidy move to the net, followed by a Ross McGarry score, the gap was down to four.

But midfielder Johnny Flynn was sent to the sin bin, and Tyrone capitalised, with substitute McHugh rifling home a brilliant goal to seal the outcome.