Shefflin sympathises with TJ Reid having to cope with ‘football’ tactics 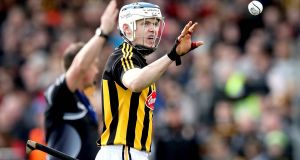 TJ Reid: “Eoghan O’Donnell [Dublin] did a fabulous job and hurled very well but his concentration was on TJ . . .it is very difficult to play against that,” said Shefflin. Photograph: Ryan Byrne/Inpho

Speaking at Thursday’s launch of Centra’s #WeAreHurling campaign, for which he is a brand ambassador, Shefflin – now managing his club Ballyhale Shamrocks – recalled how he had encouraged a downhearted Reid six years ago when the latter was questioning his future as an inter-county hurler.

“I was only talking to my father about it. Even at that stage TJ was shooting the lights out on the club scene three or four years previous to that so it just would have been such a waste. Everyone said that.

“TJ would reflect on that time and say he probably didn’t put in the work or the effort that Brian [Cody, Kilkenny manager] would want and without that time we probably wouldn’t be seeing the level of effort or performance this year or the last few years. He’s just too good of a chap to see him slip away.”

Shefflin also acknowledged that the modern game was a harder environment in which to operate than even he had been used to a few short years ago, given the influence of targeted one-on-one defending. He suggested Kilkenny’s top marksman might benefit from a spell at full forward.

“That’s the difficulty. How do you get away from that? I didn’t come across that too much where this football tactic of man marking a player by standing beside him, holding, pulling him. I think you need more protection from a linesman, umpires to get away from that.

“Eoghan O’Donnell [Dublin] did a fabulous job and hurled very well but his concentration was TJ. If the ball was there he was going for it alright but, yeah, it is very difficult to play against that.

“If you’re a player who doesn’t have any interest in the ball – for me it’s very hard thing to do because you just want to go out and play. So that’s something Brian might want to go out and look at; maybe put him into full-forward, and get him away from that because then the defenders have a big job to do.

“Am I defending my full-back and ’keeper or am I just worrying about TJ. He could leave a big gaping hole. It’s something he’s probably getting used to but it is going to be a challenge because he’s such a marked man.”

He disagreed that Kilkenny had become too dependent on Reid, pointing out that he had been in slightly subdued form in recent weeks without the team suffering.

“I think he’s just been playing so well that his scoring record is just off the scales. That’s one of the pleasing aspects – that he maybe hasn’t hurled as well in the last two matches but they still won and he is contributing. Of course they’re depending on him but if Walter [Walsh] is there and one or two of the younger lads and if they get Colin [Fennelly] and Richie [Hogan] back into the mix, I think it will spread it out and put more focus on other defenders.”

Shefflin was also asked about his critical comments about Tipperary on last weekend’s Sunday Game, during which he described the 2016 All-Ireland champions’ display in losing to Limerick as “a low ebb”. He said that the coming match against Cork in Thurles would put them under further pressure.

“I was down in Cork last week – very lively, very fast, so it’s a massive game for them [Tipperary] and that’ll be it; if they lose this one they will have regressed, there’s no doubt about it. In that sense there is a bit of pressure on them because in a couple of big games this year they haven’t performed. Whether they can turn that around or not is going to be interesting to see.

He also spoke about how happy he was with Kilkenny’s two wins against Dublin and Offaly, in which the team struggled at times, because whereas the league title win had been “important for confidence and belief,” manager Brian Cody “needed something to bring them back then which they got against Dublin”.

Kilkenny travel to take on All-Ireland champions Galway in Salthill next Sunday.