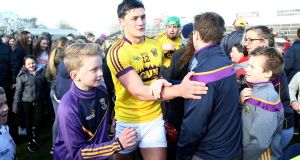 Professional rugby is having an influence on how footballers and hurlers view their sporting career. That is the view of Ted Owens, chair of the Cairde Chorcaí fund-raising body, which launched last week in order to provide support to the county’s teams.

Owens has also been involved with the county footballers and hurlers – he was Jimmy Barry-Murphy’s physical coach when Cork won the 1999 All-Ireland – and has seen the demands of the inter-county game escalate in the intervening decades along with the expectations of players.

“Lee Chin in Wexford is a player who’s decided he wants to devote himself full-time to the game,” said Owen. “These guys are looking at other sports and preparation in other sports. At one stage you had a situation where the people they compared themselves to were professional footballers in England but now they can see friends of theirs who have maybe gone down the rugby route.

“These are guys in their community, who they know and went to school and college with and there is now an expectation that they would prepare at that sort of level. Rugby has changed dramatically in recent years.

“It means that whereas our players used always to compare themselves with professionals, now they know them on a personal basis and that has raised the bar.”

It’s a familiar occurrence in Cork with former All-Ireland winning minor captain Tomás O’Leary going on to a successful rugby career, winning the European Cup with Munster and a Grand Slam with Ireland. More recently Darren Sweetnam, who hurled for Cork in the 2012 league final, has switched to the oval ball and also played for Munster and Ireland.

Owens believes Gaelic games haven’t been unduly affected by this migration, as so few players make the cut at elite professional level but he is aware that there are pressures on the GAA’s amateur status.

“Lee Chin spoke about what he saw as the inevitability of some kind of payment and you had the committee report [Towards 2034 – which remains unpublished] suggesting some kind of allowance for county players. I’m not sure the GAA can support that type of model, even semi-professionally.

“I think – and this is what the GPA was set up to do – players need to be looked after properly, treated like professionals in every sense except the monetary payment. When I was involved with Cork hurlers in ’99, you got to an All-Ireland final and you were entitled to four tickets and maybe you could buy another six. There’s been a huge evolution in recent times.

“Guys need to be treated like professionals, arriving on the bus into the best of dressingrooms, being fed afterwards. All county players should be able to have that same experience as they go training and on match day. There’s an acceptance that nobody’s going to get rich out of this.”

The provision of these supports is very much the raison d’etre of Cairde Chorcaí. Originally established as a committee to provide resources for the county’s footballers, it was transformed into a body that would assist with all teams: hurling, women’s football and camogie as well as its initial purpose.

The primary initial focus is on improving the county teams’ preparations and Owens sees a number of options.

“Training facilities are an obstacle. There is the 4G pitch beside Páirc Uí Chaoimh but it takes more than that. The initial response was, ‘oh, we need a centre of excellence – look at Kerry and what Club Tyrone have done,’ and that may well be the answer but at the same time there is a question of sustainability and maintenance.

“I was on the board at CIT when they pitched for Munster Rugby. I know Brian Mullins and am aware of what UCD has done with Leinster Rugby. As well as facilities you have the presence of expertise on the campus in both UCC and CIT so it’s a question of looking at how you might best tie up with that.”

Owens says the fund-raising organisation is still in development phase but that the intention is to make it as broad based as possible.

“We’re looking at other counties, as we’re still in an evolutionary stage. Some counties have open membership and their main source of funding is from their members. I heard a figure from Club Rossie that surprised me – they have 11,000 members.

“We’re looking at a tiered funding structure with as broad a base as possible so that the guy who can afford just to give a little can get involved and feel part of it. At the same time we’re looking for corporate support at home and abroad as well as from people who are in a position to give more. We’re examining different models, not just in the GAA,and looking at best practice.”

1 Johnny Sexton: ‘We just know we have to be a lot better in all areas on Saturday’
2 Gerry Thornley: Antoine Dupont and France look perfectly primed for Ireland visit
3 Seán O’Brien: Anger over my parents’ break-up never left me
4 Ireland's centre will hold thanks to Henshaw and Aki’s midfield muscle memory
5 Ole Gunnar Solskjær takes pop at pundits over Donny van de Beek comments
Real news has value SUBSCRIBE

Masters cancel par-3 contest ahead of this year’s tournament 16:24
Delta Work aiming to extend O’Leary’s success in Down Royal festival feature 16:20
Ole Gunnar Solskjær takes pop at pundits over Donny van de Beek comments 16:16
Bernard Le Roux cleared to face Ireland on Saturday after disciplinary hearing 15:55
Johnny Sexton: ‘We just know we have to be a lot better in all areas on Saturday’ 15:43