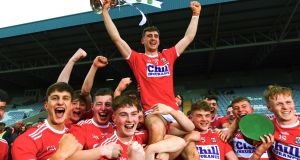 The Ulster Schools executive met on Monday night for some unscheduled and unwelcome business.

It’s a busy organisation at a busy time of year. For instance, this is high season for the MacRory Cup, the province’s senior football championship which with Munster hurling’s Dr Harty Cup, is the highest-profile of the provincial schools’ titles.

That’s the tip of the iceberg, though. Ulster schools organise 74 different competitions. So what were they doing this week?

Having to do a complete review of a draw they made back in June of last year. That’s what.

The problems began at October’s Central Council meeting in Cork – the same weekend as last year’s special congress – a bizarre decision was taken and it had the added undesirable impact of creating havoc in the GAA’s education sector.

At that meeting the under-20 football championship was mysteriously transported from its allotted dates in the summer to the busiest time of the year for young players.

To recap, the GAA took the decision in 2016 to abolish the old under-21 football championship in order to replace it with a developmental grade at under-20. This wouldn’t be an elite championship and footballers in their county’s senior panel would not be eligible to play.

Introduced as part of a suite of measures intended to address issues of fixtures and burnout, its inaugural year was 2018.

It meant that Kerry All Stars David Clifford and Seán O’Shea didn’t get to play under-20 after their exploits at minor but Offaly’s Cian Johnson was an example of a player who was directed the other way.

Those who participated at under-20 could join the seniors once their age grade season was over. It worked well despite inevitable scheduling challenges and the first two All-Irelands were won by Kildare and Cork.

This was part of a process to thin the incidence of multi-eligibility and with it the demands on young players as well as the potential for fixture pile-ups. For instance, minor was lowered from under-18 to under-17 so that players at the grade couldn’t also play senior and thereby cause havoc in club schedules simply because they didn’t possess powers of bilocation.

There were still blackspots. The third-level sector agreed to stuff their entire elite season into the month of January in order to avoid too much of a clash with the national leagues.

This represented a further undermining of what were once prestigious competitions and the reaction to the under-20 move from teams in the elite Fitzgibbon and Sigerson Cups has been dispirited to put it at its most passive – and that’s before the Freshers get started.

To make bad worse, a prohibition on schools’ players being eligible for their county under-20s was made subject to 'derogation'

Anyway, the GAA bodies for both secondary and third-level education made their plans for 2020 only to have a national inter-county age grade championship dumped into the middle of their schedules.

In the past when minor was under-18, it was the primary age grade for secondary students but that has changed. Two years ago, schools adjusted their age limit to under-19 – a reflection of the growth pre-schooling and also the growing prevalence of transition year in the Republic’s secondary schools with roughly two-thirds now offering a six-year cycle.

Consequently, school pupils are now part of the under-20 cohort. To make bad worse, a prohibition on schools’ players being eligible for their county under-20s was made subject to “derogation”.

Fermanagh were first up – and given the county’s numbers, maybe not implausibly – but they weren’t long becoming a precedent. By Monday’s meeting of the Ulster Schools, 17 and counting – SEVENTEEN – exemptions had been sought and granted around the country.

That was why the province’s competitions had to be pushed back and reviewed.

What were Central Council thinking of – if it’s the right phrase – when they decided at short notice to rip up arrangements for a developmental competition that had fulfilled its remit after only two years?

The short answer is “money”. One of those present at October’s Central Council meeting attests to the fact that one of the main arguments in favour of the arbitrary switch was to save on the costs of preparation. There is anecdotal evidence of some counties beginning training for what, remember, is supposed to be a developmental grade in June/July as early as last autumn.

This is despite Rule 6.45, which prohibits collective training until the beginning of April and with it challenge matches.

Ulster secretary Brian McAvoy, in his annual report, acknowledged that running the under-20 in tandem with the senior inter-county championships was “challenging,” but added that the calendar switch “has merely replaced one problem with a bigger one”.

Séamus Woods, secretary of Ulster Schools and someone with the experience of chairing Croke Park’s Central Competitions Control Committee, described the purported inability of 17 counties to field at under-20 without schools players in what is a developmental competition as “absurd”.

He said that “counties who had development squads from under-14 up should be able to cope with the absence of a couple of under-19 schools players” and that it “would (a) give others the chance of a run-out at representative level, and (b) would save the schools players from overuse and exploitation by self-serving county under-20 managers.”

There has apparently developed a complete disregard for what the GAA owes to the secondary and third-level education sectors. Both provide from their own pockets facilities and infrastructure, conservatively worth millions of euro across the four provinces.

They have been seriously disrupted essentially because county boards will neither enforce GAA rules nor stand up to empire-building managers.

In the course of his annual report Leinster CEO Michael Reynolds expressed perfectly the essence of this current fiasco.

“The under-20 scene suffers greatly from a governance perspective, or rather lack of same. To me, it appears that at this age grade we vote one way and subsequently act another.”