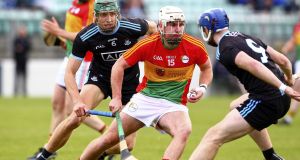 A momentous few days on the pitch for the hurling championship give way next weekend to the completion of the provincial football finals but topical off-field questions are probably uppermost in the minds of GAA administrators.

Leave aside for the moment the development funding of Dublin and the county’s continuing grip on the football championship and look at simple population trends and their impact on the GAA.

There is a view in Croke Park that even a transition to semi-professionalism and the erosion of amateur status would not pose an actual existential threat to the association but that demographic trends do.

The population of the capital is according to some projections likely to grow by a quarter of a million in the next 12 years, giving it nearly 30 per cent of the State’s population – and that’s not taking into account the greater Dublin area, which may well hit 40 per cent.

It’s not just Dublin. In other counties there is also migration from rural parishes into towns.

On a numbers basis, Dublin could be split into its municipal areas but how would that work for an association that elevated the whole concept of county identity and used it as a foundation stone? Conversely, how could it survive amalgamations of smaller counties? How passionate would “Slitrim” supporters prove?

Diluting local identity – which is as much an issue for rapidly depopulating rural areas – is an alarming prospect for the GAA. Can it be managed by streamlining the rights of those migrating to cities or towns for work to hold on to parish and county identity on behalf of their children? How practical is that even allowing for improved road networks?

It is the most challenging issue the association will face in the 15 years leading up to its 150th anniversary and probably beyond.

Can the fixture that is fixtures be addressed?

Last Sunday week, with a perplexing sense of timing, the composition of the Fixtures Calendar Review task force was announced just as the second half of the Limerick-Clare match was getting under way.

This body has been charged with drawing up proposals to address one of the GAA’s most intractable problems, the administration of a satisfactory fixtures schedule. Its work will be crucial.

Work has been done at national level through the curtailing of the inter-county season to hand more time back to the counties for their club schedules. Although Croke Park has protested not unreasonably that it can’t supervise every single county’s fixture list, it is increasingly likely that some form of monitoring and maybe enforcement – but preferably co-operation – may be needed to ensure that counties are doing their best to avail of the additional time.

That would be best organised at provincial council level and will be necessary if the work of the task force is to be implemented.

Has the senior hurling championship a developmental duty?

The success of the round-robin format in the provinces has been dependent in the two years to date on a level of competitiveness within Leinster and Munster. Both have seen back markers in each championship: Waterford accumulated one point in two years whereas the bottom teams in Leinster, Offaly and this year, Carlow have managed no points whatsoever.

Carlow are seen though to have had a creditable year in The MacCarthy Cup and last week, established player Paul Coady in an eloquent response to his county’s demotion, called on the GAA, inter alia, not to relegate them, as the lessons of hurling for a year at the top would be lost.

A favoured solution would be to elevate a sixth team into Leinster, which would effectively create a round robin with two sub-groups, one attempting to qualify for the Leinster final and All-Ireland stages and the other trying to avoid dropping back to the McDonagh Cup.

The impact would be on the competitiveness of the championship, its key quality. The province was ultra-competitive this summer with matches between the four contenders decided on an average margin of 1.5 points. Carlow’s average defeat was more than 11.

Including Laois or Westmeath in a six-team group would add five matches, one of which could be projected as competitive and the other four uncompetitive.

Would it not be a better idea to have an end-of-season play-off between the McDonagh Cup winners and the fifth team in Leinster – were Kerry to win the trophy, they have to earn their promotion to the MacCarthy Cup by playing the fifth team in Munster and to introduce the same provision in Leinster would be to add a fairer uniformity to the format.

The playoff would make more sense than the current clunky preliminary quarter-finals, which pitch the third-placed teams in the provinces against the McDonagh Cup finalists – average margin last year, 17.5 points – and bizarrely allow Tier 2 counties to get farther in MacCarthy Cup than provincial championship contestants.

Obviously this would need an advance declaration and might prompt misgivings among the McDonagh Cup counties, as the winners would be facing a team that had played at a higher level that summer but it would also be a match between a team that on precedent had lost all of its matches and another that had won a prestigious title.

The playoff would also give the bottom placed team in the round-robin a chance of preserving their status by playing the very same fixture that the following year would probably determine their status – but in this way, the whole provincial championship wouldn’t be distorted.

It’s how Carlow stayed in Division One of the league this year, extending their opportunity to play top teams by beating Offaly in the relegation play-off.