Seán Moran: The play's the thing so take pressure off referees and focus on hurling

The rapidly changing game has intensified pressure on match officials 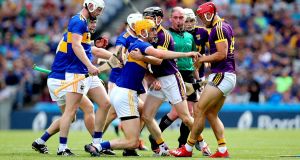 Twenty years ago this championship season saw the first introduction of red and yellow cards, which had its teething problems in an at the time notorious Carlow-Westmeath football match, featuring six dismissals. Since then, there have been so many changes in the playing rules and the duties of referees, it would make an interesting time-lapse photography graphic.

Advantage rules, blood subs, black cards, Hawk-Eye, the mark – to name a few and that’s before factoring in the public sphere in which social media adds to the volume of commentary/mindless abuse.

There is of course an element of Chicken Licken about controversies, such as the weekend’s but just because the sky isn’t actually falling doesn’t mean that there aren’t issues arising from both All-Ireland semi-finals.

The litmus test for whether refereeing should be exposed to the type of scrutiny being conducted in the past couple of days is simply whether or not it made a difference to the outcome.

Unfortunately for Limerick, it probably did in that the failure to detect the deflection of Darragh O’Donovan’s lineball in the dying seconds may well have cost the champions extra time. To manager John Kiely’s credit, he didn’t make a song and dance out of the incident, appearing to accept that his team had done well enough to undermine their chances without dragging match officials into court as witnesses.

Controversy is inevitable when it comes to probably decisive, late incidents because the implications are easy to grasp.

It was Meath captain Nigel Crawford, who queried after his team’s infamous ‘pushover’ goal against Louth had landed the Leinster title in 2010 why refereeing errors at the end of a match get such disproportionate coverage compared to those that happen at an earlier stage.

Clearly on the field there’s no time to recover from a late miscarriage of justice but philosophically, Crawford had a point.

Kilkenny referee Seán Cleere found himself in the spotlight on Sunday after a rip-roaring All-Ireland semi-final between Tipperary and Wexford. He was probably lucky that Tipp won, as the litany of woe suffered by the winners – red card, three disallowed goals – would have made for fairly indignant reaction had the outcome tilted the other way.

Not that Wexford were bereft of complaints but like Limerick on Saturday they had been masters of their own fate in the final quarter before narrowly losing out.

Cleere was ill-served by the appointment for starters. There has been much stiff upper-lip talk from Croke Park in the interim, defending the choice of match official and – in all fairness, what else were they going to say – accusing the consensus reservations of creating unfair innuendo around the referee.

The fact that his own county had – unexpectedly – reached the final on Saturday made the appointment of Cleere on Sunday a matter of raised eyebrows. The referee’s county man and acclaimed Laois manager Eddie Brennan had raised the matter on radio before the match even started.

It did appear to exert intolerable pressure on the referee, who went on to fulfil the terms of the Chinese curse by living – for nearly 80 minutes, anyway – in interesting times.

For all the protestations about there being nothing wrong in appointing a match official whose county is already in the final to take charge of the second semi-final, it had never happened previously in the 23-year history of the stand alone semi-finals.

Coincidentally there were three years in which different Cork referees – Diarmuid Kirwan, John Sexton and Cathal McAllister – took charge of second semi-finals when their own county had been in the first, but on each occasion Cork had already been eliminated when the appointments were made.

That is the significant difference between the schedules then and in the past two years when with the semi-finals being staged on the same weekend, appointments for both are made in the same week.

Furthermore, in the previous 13 years of two semi-finals (Ulster champions being admitted straight to the last four) no county provided a referee for a semi-final, having already qualified for the final.

It’s probably safe to say that it won’t happen again for a while.

Officiating controversies generally break into two categories, systemic and erroneous. The Hawk-Eye call on Sunday was systemic and unfortunate that the decision took so long but it culminated in a correct decision.

The other two goals were disallowed on judgment calls, one correct for a foul on a defender and the other a more questionable failure to apply the advantage rule, exacerbated by the revised decision not to award a penalty but a free.

It wasn’t all one-way traffic either, as John McGrath’s sending-off could have been on a straight red card rather than a second yellow, which would have cost him his final place and Barry Heffernan’s punching Diarmuid O’Keeffe, which would at least have reduced Tipp to 13.

The call for a second referee in hurling should be treated as a separate issue, as Cleere kept up with play but given the speed of the game, it would be worth trialling. It would, though, require acclimatisation and some ramped-up recruitment strategies in the face of widespread difficulties in persuading people to take up the whistle.

Otherwise, and given the rate of evolution in officiating, it’s impossible to envisage a future where video review won’t be made available. The deliberations over Wexford’s third goal could really have done with that technology to make a definitive call.

The more the assistance, the better, as epic days like these deserve to be celebrations of the game rather than obsessive routines of finding fault with officials, whose occasional errors are accorded far more weight than those of anyone else on the field.