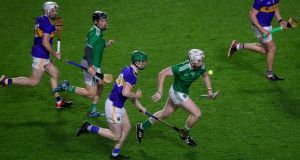 Cian Lynch: his move to centre-forward caused Tipperary plenty of problems last weekend. The power of Limerick’s middle third left Tipp flailing every bit as much as it did in the previous season’s Munster final. Photograph: Ryan Byrne/Inpho

There was a sense of weariness in Liam Sheedy’s post-match remarks last weekend.

Not that most present in the eerie confines of an empty concourse in Páirc Uí Chaoimh were feeling too energised after a hurling match played in weather lifted from an Old Testament passage concerning a particularly vengeful God.

Tipperary probably knew they were on a hiding to nothing going in for a first competitive match in nearly eight months against a team with an outing – and a title – already under their belt but even allowing for that, the outcome was downbeat.

The All-Ireland champions literally never once looked like they were going to win, as even the dogged reduction of a deficit beginning to yawn resembled someone chasing a bus and gaining a few metres when it’s already a street away.

Sheedy put the best spin on it: “The only good news is we’ve been the back roads before, so we do know the back roads; it’s a road we have travelled before.”

And that is the strange truth about the manager’s now five years in charge of his county. The least successful years of his two terms have come in those seasons when he has won the Munster title, the first two in 2008 and ’09, which culminated in All-Ireland defeats in the semi-final and final.

His two championships since, 2010 and last year have ended with the Liam MacCarthy back in Tipp, both significant achievements and each – curiously – prefaced by defeats in Munster, which at the time felt even more apocalyptic than last Sunday’s.

There are however differences, which suggest the road this time may be harder and less likely to lead to that happily familiar destination.

Sheedy’s victories in 2010 and ’19 were carefully plotted and brilliantly delivered on the day – throw in 2009 and the team’s best displays were All-Ireland finals – once the shock of defeat had abated.

Last year’s demolition by Limerick in the Munster final followed a different pattern, as it came under an entirely different format – Sheedy’s first acquaintance with the round-robin provincial championships. The group matches were negotiated with considerable flair and they were unlucky with injuries by the final.

Patrick Maher, who has yet to play for Tipp since, injured his cruciate in the round-robin match with Limerick and Cathal Barrett was also out for the final.

Yet Limerick themselves had followed a similar template, getting well beaten by Clare in Ennis two years ago and rebounding to win the All-Ireland. It was almost as if the structure was so intense that teams needed a reset along the way.

This year is so different in any number of ways, the weather, the empty stands and the reversion to a qualifier system, meaning fewer matches, plus the speeded-up timetable. In a fortnight the hurling championship has covered as much ground as used to take a month and a half.

There is accordingly no margin for injuries or other mishaps. Tipp, like Wexford, are fortunate to have an additional week to work out what went wrong at the weekend but otherwise this is helter-skelter stuff.

The big obstacle for Sheedy and his team is simply, Limerick. Although they beat their predecessors as All-Ireland champions in the provincial group stages last year, Tipp have found their neighbours unyielding when the stakes get high.

There was something a bit forlorn about the manager’s rationale for opting to play into the howling wind in Cork at the weekend.

“Yeah, well we thought maybe some of the championship matches were slow starting and they didn’t find a rhythm in the first half so we thought maybe if we could try and batten down the hatches . . .”

But for umpiring error in last year’s Kilkenny semi-final, Tipp would probably have been facing Limerick again in the All-Ireland final

In other words, Limerick might be a bit unsteady off the blocks. It sounded like a battle plan was very much built on containment. The innovation of tasking Alan Flynn to man-mark Cian Lynch was immediately complicated by the latter’s switch to centre forward.

They had lost Séamus Kennedy to injury and his physical presence was missed but Limerick were down two-thirds of their exceptional full-back line.

Behind it all, you’d wonder whether Tipperary can confidently see a road that takes them beyond Limerick at whatever stage their journeys might reconnect. The power of that middle third left Tipp flailing every bit as much as it did in the previous season’s Munster final.

But for umpiring error in last year’s Kilkenny semi-final, Tipp would probably have been facing Limerick again in the All-Ireland final and how would that alternative history have concluded?

For Sheedy the differences with the past are obvious. Ten years ago, he had a gifted, coming team that got a bad performance out of their system and kicked on.

Some of those same players were looking old at the weekend. Pádraic Maher, probably the team’s most totemic presence, was replaced for the final quarter. High-performers like Brendan Maher and Noel McGrath struggled to put their imprint on the contest whereas captain and current Hurler of the Year Séamus Callanan failed to score in a championship match he started for the first time in nine years.

Maybe the weather took a particular toll but it’s instructive to remember that before they went to Cork in May of last year, Tipperary were being depicted as a bit old and slow. They emerged that day in fantastic physical shape – an aspect of preparation that Sheedy had prioritised – and went on thoroughly to vindicate themselves.

Callanan said a couple of weeks ago that the disrupted season had made it seem like the manager’s third and not second year in charge. After the weekend, it doesn’t look in the team’s interest for time to move that quickly.