Seán Moran: GAA plots its course through the chaos of 2019 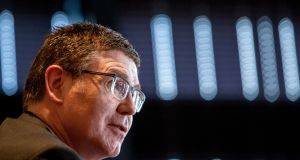 Tom Ryan: the GAA’s director general will have to address the various contentious issues besetting the organisation. Photograph: Gary Carr/Inpho

Has the GAA ever been in so much chaos: not in the catastrophic sense but simply existing at a time of so much uncertainty and in the midst of so many experimental challenges to the way it has conducted its affairs for so long?

On Saturday Central Council lost its nerve on the trial to restrict hand-passing but proceeded with the other four experiments, which may be mildly interesting – although the sinbin is a retrograde step compared to the original black card sanction – but none of which square up to the existential challenge facing football.

Of course there isn’t consensus on what exactly that challenge is – the zooming hand-pass-to-kick-pass ratios, ultra-defensive tactics or competitive imbalance at inter-county level – but the signs of flagging public interest, both at the turnstile and remote control, are real.

Maybe aptly, it’s a century this week since the greatest period of turmoil experienced by the association began. The twin starting signals of the Independence struggle – the meeting of the first Dáil and the attack at Soloheadbeg – flared over the country 100 years ago last Monday.

If current concerns appear wan in comparison to the events that followed, including Bloody Sunday and the widespread disruption of activities, they are none the less urgent and challenging.

At the same Central Council meeting that skewered the hand-passing experiment, ticket price rises were rubber-stamped, with all of the consequent discontent that entails.

GAA director general Tom Ryan is less than a year in office and is well equipped for dealing with the various flash fires in one essential respect; as the association’s chief finance officer, he learned to take a closer look at things before panicking.

Year in, year out he had to talk through revenues going up and revenues going down, all the while pointing out that it would be unwise to get carried away with what were probably transient trends.

Twelve months ago he cautioned against the assumption that the round-robin format for the All-Ireland football quarter-finals and provincial hurling championships would turn into a windfall.

“I think it will grow, but when we sat down to do our budget for the year – it’s interesting when you look at it; the games are going to come thick and fast this summer and even the most committed of patrons will have a job to get to every game once it gets to the quarter-final stage of things.

“So it’ll be an increase but I don’t think it is going to be the bonanza that at first glance looking at the number of games involved that we might have expected.”

There’s little reason to expect Ryan suddenly to lose his head over the precipitous drop in Croke Park football attendances last summer, not because they’re of no concern but because no-one can be certain what about the underlying cause is.

It’s easy to forget that the championship itself is in the middle of a three-year experiment, with the round-robin format on trial.

The past quarter of a century has seen unparalleled change in Gaelic games, some of which has taken place on the back of trials and experiments, such as the qualifiers and the dilution of sudden-death championship structures, but nearly all of which was to the reasonable onlooker pretty assured of success.

Current trials are far less predictable. What will be the ultimate judgement on the round-robins and the abandonment of September as the exclusive month of All-Ireland finals?

We won’t know but in terms of attendances, the GAA has always been to a greater or lesser extent a hostage to fortune when the draws are made. Asked a year ago whether he was concerned about attendances in the longer term, Ryan spelled out the reality.

“Concerned is probably the wrong word; vigilant is probably a better word. I could well be standing here next year rationalising a slight dip again. It is very difficult to ascribe the increase to any one particular thing we did.

“Really, without talking down our own efforts, they are kind of secondary – there are games that people just want to be at and will be at come hell or high water, and to a certain extent it doesn’t matter where or when they are on or what price you are charging for them. Three or four of those games will drive your championship year more than all the rejigging of prices and all that will do.”

There has been the added complication of Dublin’s dominance and the absence last year of a Mayo or Kerry to challenge the champions, as had been the case in all of their previous All-Ireland victories this decade and with the knock-on effect in Croke Park attendances.

Hurling was an unexpected success story with both provinces proving competitive – no county won all of its matches – and big crowds coming out but the game is notoriously given to cycles and currently it is more open than at any time in the past 20 years.

A re-emergence of dominant counties would have a chilling effect on the enthusiasms of last summer.

Gauging public interest in the games is just one of the issues swirling around Croke Park at present. There have been loud complaints from both county managers and college coaches about the burden on third-level players at this time of the year and progress on the club fixtures’ crisis remains slow and difficult.

Put it this way: does anyone know what the GAA’s activities calendar will look like in five years – and will it be robust enough to last another 50?