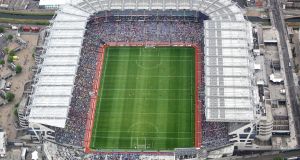 Croke Park: A decade ago there was a new GAA headquarters, lauded by civic society for its creative ambition and record crowds to fill it. Photograph: Norman McCloskey/Intro

Years roll by with another one now nearly done. Twelve months isn’t just a random period of time but a cycle of events that usually bear some comparison with other years.

Decades are another matter. Longer-term trends don’t always fit conveniently into 10-year rotations but we can generally work out whether things have progressed or regressed over that time.

The one thing that would strike anyone looking at the GAA in its historical context is that the pace of change has considerably quickened. Now into its 136th year, the organisation is experiencing more radical departures on a regular basis than it went through in its first 110.

Change can be the outcome of circumstances. In 1913 the GAA enjoyed probably its best year since establishment; the games were optimised into 15-a-side with no outer posts, crowds rose steadily and Croke Park – as it became known – was acquired on Jones’s Road.

Yet within six years there were problems everywhere: World War, an uprising, an independence struggle and in due course the Civil War. Government crackdowns, transport restrictions and the upheaval of civil unrest left the GAA’s schedules disrupted and unknowable.

The consequences for the games were disastrous and crowds fell and with them media interest – already distracted by raids on newspapers.

It’s fair to say though that the only thing this year has in common with its 20th-century counterpart is that unlike the Wexford footballers of 100 years ago, Dublin turned their four-in-a-row into five.

But it wouldn’t be true to say that the GAA is not vulnerable to fast-moving events even if not comparable to the experiences of a century past.

A decade ago there was a new Croke Park, lauded by civic society for its creative ambition and record crowds to fill it. Championship structures had been revamped and were proving popular.

There’s nothing like an economic depression to put that sort of euphoria to the test and so it proved but paradoxically, on finances the GAA did a good job in holding things together.

For instance this decade has seen the GAA receive a dividend from the stadium of around €55 million despite the heyday of rugby and soccer internationals having long gone.

On the field, 2010 was an unusual year – the only one in which both All-Irelands were won by counties, Tipperary and Cork, coming through the qualifiers. There was an anxiety that the provincial championships were on borrowed time with the pathway to success apparently running along the outside track.

That proved misplaced in football, as there were no further qualifier champions after Cork for the rest of the decade but hurling has gone in the other direction and the current three-year trial structure has so far thrown up two Munster All-Ireland winners, neither of whom has won the province.

At administrative level the threat to football’s provincial championships has never been as existential.

Two of the three options advanced by the Fixtures Calendar Review group involve either four eight-team structures in their place or supplanting their role in the All-Ireland with the national league switched in from the early months of the year.

The concept of a Tier 2 football championship has already proved problematic with many of the potential competitors unhappy at the prospect. From one perspective it’s an administrative solution that requires counties to earn their place in the elite championship.

It is telling though that this increasingly is how a community-based organisation sees it main competitions – structured meritocracies as opposed to the tradition of the annual event in which everyone was entitled to a shot and fired by the idea that every once in a blue moon, something big would happen.

There’s no right or wrong choice here but how will the new structure play out? It’s one example of how uncertain things have been this decade.

As an organisation the GAA had begun to move confidently on matters of reform in the 2000s. The old bans went by the wayside – Rule 21 to facilitate the recruitment of a new police force in Northern Ireland and then Rule 42, initially to allow internationals to be played while Lansdowne Road was under reconstruction.

There were the qualifiers, introduced to football and a year later, hurling. The DRA sorted out the temptation to head for the courts to overturn suspensions and the disciplinary process has been greatly stabilised and improved as a result.

The big difference between those reforms and the current ideas is that the former clearly needed to be done and there was little doubt that they would prove to be successful.

There is no such conviction now. Even the Fixtures Calendar Review report leaves open key proposals to get a sense of what the membership wants when the recommendations are toured around the country.

During the 2000s there were concerted efforts to get Dublin up to speed in terms of the penetration of Gaelic games and they were largely successful but 10 years later there are now concerns that the capital, with population shift continuing apace, is becoming too big.

Pay-for-play looked to have been taken off the table by the incorporation of the Gaelic Players Association into the Croke Park fold almost exactly 10 years ago. Now the current CEO of the GPA, Paul Flynn, speaks openly about semi-professionalism.

In the past the GAA could be depicted as being slow to change and big reforms were endlessly debated and defeated before they finally got the green light. There was no doubt about the issues involved.

Conversely, at last October’s special congress in Cork, three football rule changes – including the advance mark, which is causing some anxiety amongst referees – were ushered into the GAA’s official guide after approximately half-an-hour’s discussion.

A new decade dawns amidst accelerating change and diminishing conviction.