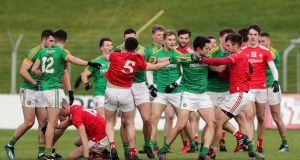 Tempers flare between the sides during the Bord na Mona O’Byrne Cup between Meath and Louth. Photo: Laszlo Geczo/Inpho

Louth made the best possible start to their O’Byrne Cup campaign on an experimental day with a fully deserved victory over their neighbours in difficult conditions at Páirc Tailteann.

Both sides fielded several newcomers and as well as having to cope with wind and rain they also had to adjust to the new rules.

They didn’t have a major impact on proceedings but Meath did take advantage of the mark in attack on three occasions to score points.

Sam Mulroy who was a late addition to the Louth starting 15 proved the main difference on the day, scoring 1-4, with his 45th minute penalty goal the game’s crucial score.

The visitors had the advantage of the breeze in a dour opening half and at the break they led 0-6 to 0-4. They should have been further ahead at that stage but they hit eight wides in the half, one of which was a goal chance from Mulroy.

Points from Mathew Costello and Jack O’Connor had the sides level within six minutes of the restart and Thomas O’Reilly then pointed Meath ahead with a fine effort from the left wing.

However Mulroy’s penalty goal following a foul on Tommy Durnin gave Louth a cushion and they held until the finish.

The game livened up considerably in that second half as Louth dug deep to preserve their lead and eek out the win.

The exchanges became heated at one stage near the finish resulting in Meath’s Jason Scully receiving a black card which was followed by a red, he had earlier been booked, and Louth’s Paul Matthews picking up a second yellow.