Seán Moran: Club GAA will be reluctant to return to ha’penny place 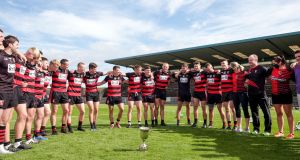 The law of unintended consequences may not be an entirely apt way of describing the GAA’s current prolonged process of reflection simply because the association has been forced – like everyone else – to react rather than plan its way through the past six months of uncertainty.

Yet the phrase communicates the idea that measures introduced to confront one set of circumstances may have downstream effects that weren’t originally envisaged.

Most obviously, the split season has emerged from a previously shadowy existence into the full glare of almost blinding approval.

It’s an interesting concept in that there has always been some sympathy with it at Croke Park level but it was never quite seen as the optimal solution until the enforced events of this year effectively granted it a trial.

For instance last year’s report of the Football Calendar Review Task Force discussed it in some detail without quite being able to make it a final recommendation.

The calendar taskforce will continue to war-game the idea until it’s ready to be added as a fourth recommendation, presumably with sufficient momentum at that stage to make it the front-running proposal for the approval ultimately of congress.

There is however a more fundamental concept – a core value – of the association that has also been significantly affected by the pandemic shutdown and restrictions.

Amateurism has caused nearly as much agonising within the GAA in recent decades as the fixtures issue.

It is a topic on which the GAA can call on the instructive experience of others but that in brief is the history of drawing lines in the sand.

Early attempts to come to terms with the changing world, such as the 1997 report of a bespoke Amateur Status sub-committee or the 2002 Strategic Review Committee, both chaired by former president Peter Quinn found themselves behind the curve pretty quickly.

In fact the SRC report devoted just seven out 265 pages to amateurism and the recommendation was reduced by one wise reporter to the GAA’s essential message: “More people should pay players to do things as long as it’s not us”.

There’s more to amateurism than simply monitoring the incremental progress of pay-for-play or more accurately, endorsement and advertising opportunities.

It’s also a consideration in the commercialisation of the intercounty game and the financial acumen shown in sweating the assets of a custom-built Croke Park.

No one can credibly query the probity of where the money goes and the interests it serves but on a day-to-basis the GAA had come to resemble a modern, elite, box-office sports organisation replete with all the associated commercial potential but grafted on to a community-based recreational network.

This has meant growing tension between administering elite games with considerable box-office appeal for two per cent of players and an organisation supposed to be providing recreational activities for the other 98 per cent.

This in turn fed into the fixtures issue because the more money was generated through turnstiles, media rights and sponsorship the more essential rising revenues became to the whole structure.

In the past six months, however, like many a business model, the GAA’s financial world has been turned upside down, as coronavirus attacks the very thing that underpins the Gaelic games season – mass gatherings.

Symbolically just before the financial basis of the GAA was all but wiped out, there had come confirmation that the intercounty game was costing nearly as much (nearly €30m) in terms of county expenditure as it was producing in gate receipts (€36m).

The good weather, decent surfaces and unimpeded access to county players have been a blessing for clubs up and down the country

In the difficulties that have followed, which included 40 per cent pay cuts for some Croke Park staff, there has been plenty of scope for focusing on what is of essential importance.

So far there have been three prominent themes.

One, the dawning realisation that as developed – ie without the “windows” of professional sports – Gaelic games is finding its intercounty activity incompatible with its club season.

Attempts to make it work, such as insisting on April as a “club first” month helped to make up the numbers – freeing up more weekends for clubs. But as conceded by Croke Park the current experiment has seen an improvement not simply in the quantity of weekends available but in the quality.

Two, a reset on priorities. During the lockdown the community aspect of the GAA came to the fore with various examples of social assistance and community solidarity commonplace.

In a time of crisis this volunteerism turned out to be a more accurate expression of GAA priorities than the high-profile events with which it is more associated.

When the games returned, the colossal effort that went into ensuring there was a safe return to play meant that a whole recreational sports programme was rolled out for people of all ages.

The crisis ensured that the intercounty game would be on reduced rations and the GAA decided that it would come second to the clubs when play resumed even though as pointed out, this would be counterintuitive.

Now the talk is of a reduced season, which may generate less income but will also incur fewer liabilities.

Three, the good weather, decent surfaces and unimpeded access to county players have been a blessing for clubs up and down the country. Why would they want to revert to their lot for the past couple of decades – and remember that if they’re sensible and show even a modicum of backbone, clubs call the shots in a county?

It’s taken the first pandemic in a century but in the space of six months the GAA shows all the signs of having changed, maybe unintentionally but fundamentally.