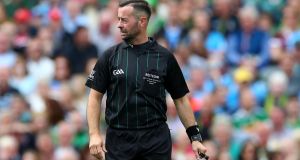 It was at the time viewed as one of the least hopeful signs of any intercounty activity for the rest of 2020 in the face of Covid-19: David Gough, referee for last year’s drawn All-Ireland football final between Dublin and Kerry, informing the Meath county board in June that he wouldn’t feel safe or comfortable returning to duty as long as social distancing was required.

This came just ahead of the recommencement of club activity, and in turn ruled Gough of the intercounty game, set to resume on October 17th, once those same social distancing rules applied, and more likely until a vaccine was found against the coronavirus.

“As long as there is social distancing still in place I won’t be taking charge of club matches in Meath for the foreseeable future,” Gough said at the time. “It’s only two months since two metres seemed to be a life and death matter. If I go to town now I have to be two metres away from someone and wear a face mask at the same time which is HSE advice.

“So I don’t understand how I can safely be in a confined space with 30-plus people on a football field and be socially distant. Until that changes I won’t be coming back.”

Gough, however, was back in charge for Sunday’s Meath senior football championship match between Gaeil Colmcille and Dunshaughlin, his first act as referee in the six months after all GAA activity suddenly ceased back in March, and he’s now expected to return to the intercounty game, should that return on schedule.

With that Gough has become one of the more hopeful signs of intercounty activity for the rest of 2020, even in the face of Covid-19. He has indicated that the successful return of the GAA’s Cúl Camps in late July and August helped influence his decision, highlighting the fact some 71,000 children took part in the 800 camps across the country this year, despite all the restrictions around Covid-19, a still healthy number compared to the 156,000 children that passed through the 1,234 camps in 2019.

“These figures are incredible,” the Slane clubman said in a Tweet “The GAA should be delighted with all that Charlie Harrison did in preparation for mid Pandemic Cúl Camps to operate successfully and provide such welcome playing opportunities for GAA children nationwide.”

At the time Gough also indicated that because his team of officials is made up of family members, his decision was made on the back of their own personal scenarios: “It’s not a decision I took lightly. I thought very hard about it. It’s based on my own personal circumstances and those of my umpiring team and I didn’t want to put them or myself [in harm’s way] based on our personal situations. So at the moment we decided it’s best not to return until social distancing isn’t an issue on a Gaelic football field.”

While the Kildare county board haven’t yet given up hope of completing their county championships by the October 17th deadline, despite the county only coming out lockdown on Monday, several other counties are moving closer to their completion with ample time to spare.

The Dublin county board has confirmed the line-up for this Sunday’s double-bill of senior hurling semi-finals at Parnell Park, Lucan Sarsfields against Cuala first up at 2.0, followed by Ballyboden St Endas against Na Fianna at 4.30.

The Cork county boards successful free-streaming of its championship also continues this weekend with a triple-header of final round of games from two grades. First up on Saturday is the likely decisive intermediate meeting between Cill na Martra and Knocknagree in Mourneabbey.

On Sunday, the senior meeting of Douglas and Nemo will also be streamed live from Páirc Uí Chaoimh before the meeting between O’Donovan Rossa and St Michael’s at Enniskeane.

Meanwhile the GAA’s fixtures taskforce will convene again Wednesday evening to consult further on the likelihood of agreeing a split season structure from 2021.

“I’m sure some people are potentially opposed to it, from a player’s point of view, I’d be behind it 100 per cent,” Philip Mahony, joint captain of newly crowned Waterford hurling champions Ballygunner, among those to give his back to that format on Monday.