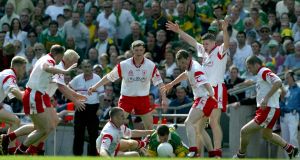 We live in the present, not in the future. Nearly 30 years ago I asked a senior colleague what it had been like to cover football in Kerry’s ‘Golden Years’: surely a little boring, given the predictability?

No, he said. At the start of each championship, no-one really knew who was going to win the All-Ireland and it had to be allowed to unfold and play out. Nothing is absolutely foreseeable even though when you look back through the record books, it mightn’t appear that way.

How certain are Dublin to win? For those betting on the outcome, there is little ambiguity, with the champions at 7 to 1 on. To put that in a bit of context, when Kilkenny hurlers were closing on their fourth successive All-Ireland in 2009, their odds, which tightened right through the final week, ended up no more forbidding than 5 to 2 on.

So the weight of money is, well, heavy on Dublin.

This is hardly surprising. The sheer competitiveness of the county this decade has brought in five All-Irelands and should the next two be won, not alone will it signal the fabled and so far unachieved five-in-a-row but it will equal Kilkenny’s record in the 2000s of capturing seven titles.

The caveat is that Tyrone like it that way. It’s not simplistically that Mickey Harte can conjure guaranteed strategies when his team are underdogs – after all, as a friend remarked this week, the Tyrone manager hasn’t strategised the defeat of Kerry or Mayo for 10 years and was pulled asunder by Dublin last summer – but there is an undoubted streak of iconoclasm in Ulster counties.

It has burned most brightly when Kerry are about, as seen in previous decades with Cavan, who stopped the five-in-a-row in 1933, Down, whose three All-Irelands in the 1960s went straight through Kerry, and then four decades later when Tyrone arrived.

Even before Mickey Harte took command, Art McRory led the county to a famous brush with sensation in 1986 when leading Mick O’Dwyer’s Kerry by seven points five minutes into the second half and 11 years later they lost by just a point to Dublin in a controversial final.

There were strong parallels between that Tyrone side and Down in the 1960s. Neither team’s tactics were enthusiastically received in Kerry, beaten by both counties en route to an All-Ireland three times in their respective decades, but more tellingly, there was enough complacency to disorientate the favourites.

O’Dwyer’s famous 1976 dismissal of Down as “not being good for the game” has maybe overshadowed that but in his autobiography, he stated that “when Down qualified for the 1960 All-Ireland final, Kerry weren’t all that concerned about taking them on. All things being roughly equal, we felt that Kerry would always beat Down on the big days.”

As is well known, 58 years and five All-Ireland championship meetings later, Kerry still haven’t managed to do so.

“We weren’t too worried about them,” Ó Cinnéide ruefully recalled. “They weren’t one of the main teams that we had to beat. We hadn’t really thought of them. That’s worse than a lack of respect at times. They weren’t on our radar at all.”

In both cases, 1960 and 2003, what made this odd was that Kerry had been beaten that spring in the league by their Ulster opponents and in terms that more than warned them about what was to come.

“We saw it as a bit of innovation,” said Harte on TG4. “The philosophy we had at that stage was really an extension and an adjustment to things that we had learned over the years at minor and U-21 level where collective defending was the order of the day.”

Harte’s legend may have been created in 2003 but it rests as much on the 2005 and ’08 All-Ireland wins as the iconoclasm of the initial breakthrough. In those years, under different managers Jack O’Connor and Pat O’Shea, Kerry were forewarned but even as favourites couldn’t handle the pace of Tyrone’s game, the ferocity of the tackling and the ability of their opponents to turn over possession.

There behind the achievements – and this was a theme of Tír Eoghain: The Unbreakable Bond – shimmers the almost unbelievable litany of distress caused by bereavement and loss, which sometimes lends an air of mission or destiny to the county but aside from that bond of shared grief, it’s as well not to be misled.

There have always been material reasons for these successes, rooted in technical proficiency and tactical acumen. The cussedness and edginess of the outsider has only been relevant in the ability to perform without concession to the big day.

It may be ominous – or certainly cautionary – for Dublin that Harte’s unbeaten sequence of three All-Ireland finals includes two as outsiders and all three have been achieved against the defending All-Ireland champions.

Of course Tyrone aren’t quite where they were in the 2000s. Even in 2008, when the panel had been sufficiently shaken up in the previous five years that just six players started both finals, there was nonetheless a core of players going for a third All-Ireland medal.

As well, Dublin’s record against Tyrone is better than Kerry’s in the last decade; they have lost just two of the seven championship encounters in Harte’s era and under Jim Gavin, the champions are two from two.

The lesson is though that should Dublin find themselves even unexpectedly in trouble on Sunday, then they will be in trouble.