Seán Moran: 1956, when polio ravaged Cork and hopes of a treble evaporated 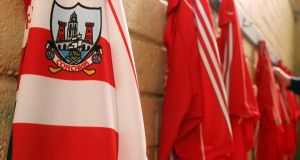 GAA president John Horan’s insistence that this year’s tightly packed championship schedules would have no tolerance for any counties being temporarily sidelined by a coronavirus outbreak among players caused intakes of breath around the country.

It had the merit of being straightforward and if any deferral were possible, they’d see what they could do but in all likelihood, it would be full steam ahead down the track towards the Christmas All-Irelands.

There remained an undercurrent of scepticism, especially about football, which has the most pressurised timetable. What if Dublin or Kerry all fell ill or even sufficient numbers of other counties, regardless of perceived prospects? At what point does the championship lose critical mass in terms of its credibility?

Then there is the way that these things have a tendency to work out as problematically as possible.

The last time the GAA championships were delayed before this year – allowing that there was a little tweaking done to the 1979 All-Ireland football final in order to accommodate that year’s papal visit – was in1956 and the reason back then was also rooted in public health.

Causing the problem was a serious outbreak of poliomyelitis or polio in Cork. As fate would have it, the county reached all three senior finals, camogie, football and hurling. Maybe they were lucky. These days there’d have been a good chance of the women footballers making it four out of four.

Anyway the finals were pushed back. In the event, Cork lost all three – the only time a county has been so ill-used by fate – the same summer that a public health battle was raging, mostly in the city.

It was the last of the dreaded 20th century epidemics, as tuberculosis was by then under control, and with a vaccine on the horizon, polio was heading in the same direction. Although it is remembered as being in Cork, the disease had been occurring in other parts of the country as well.

The first major outbreak in Ireland came between 1942 and ’43 – even though the disease only became notifiable in 1941 – and carried a massive mortality rate of nearly 30 per cent or 487 cases and over 133 deaths.

Afflicting the young, polio with its awful consequences – many of those who survived were left disabled – caused terror among parents. It wasn’t a major concern in my childhood in the 1960s but we were still getting sugar-coated vaccines against it.

I remember the sobering, plaster installations in the image of a stricken, red-haired boy sitting down with a collection box on his knee even if there’s no recollection of the slogan – half demand, half description – ‘Action for the Crippled Child,’ that reproachfully adorned some of them.

The original outbreak doesn’t appear to have impacted on GAA activity, possibly because war-time restrictions reduced the impact. Ironically, Cork had escaped on that occasion.

A major difference between then and now in respect of GAA scheduling is John Horan’s point about how little room there is to spare on this year’s calendar. In the 1950s, championships were more leisurely affairs in terms of their timetabling, anyway.

The first case in 1956 came in June of that year and the spread was steady throughout the summer. The strain of polio was “of a mild nature”, according to the Minister for Health Tom O’Higgins but there were still hundreds of cases and a number of deaths, albeit small.

As the outbreak picked up during the summer, the impact was only felt by the time of the All-Irelands and remedial action required only because the epicentre of Cork had a team in each of them.

But there were impacts. Cork’s opponents in the camogie semi-final, Mayo withdrew because of health concerns and the footballers struggled to find counties prepared to play challenge matches.

In that month of August, a byelection in the Cork City constituency saw a turnout of only 56 per cent – 12,000 down on the previous general election, which was largely attributed to the polio outbreak – elect Fianna Fáil’s John Galvin.

On the week of the footballers’ semi-final against Kildare, The Irish Times reported – in an echo of the acting chief medical officer’s request to current GAA president to ask clubs to behave after county finals – that in August 1956 the Dublin City medical officer had appealed to the Cork chair PA Murphy to ask “supporters not to bring children under 14 years” to Croke Park.

“As a large number of Cork people are expected to make the journey to Dublin to attend the match, Dr O’Regan wants to guard against the possibility of introducing polio into Dublin.”

Cork weren’t involved in a hurling semi-final because of the draw that year but there still needed to be a Central Council decision to defer the finals, as the epidemic worsened.

Hurling opponents Wexford were gracious about the request and their Central Council delegate and star forward Nicky Rackard, who would score 1-5 in the final against Cork, assured the meeting that his county would “co-operate to the fullest extent”.

There remained misgivings and in a letter to The Irish Times the week of the match, a Dublin correspondent signing themselves ‘Paterfamilias’ called on the Government to “cancel the final” unless assurances could be given by the Cork medical officers that “the disease has been conquered”.

The hurling final went down in legend. It remained Wexford’s last championship win over Cork for 50 years and marked Christy Ring’s last appearance in an All-Ireland and is still the second-highest attendance at a hurling final, 83,096.

In the football final Cork lost to Galway and the ‘Terrible Twins,’ Frank Stockwell and Seán Purcell in the GAA’s last public health-delayed final, played 64 years ago today.