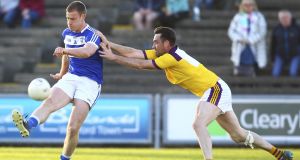 Donal Kingston of Laois shoots under pressure from Wexford’s Daithi Waters in his side’s victory at Wexford Park in the SFC opening weekend. Photograph: Ken Sutton/Inpho

There was a fairytale finish to this enthralling game as Laois fought back from 10 down at half-time, forced extra-time and eventually ran out six-point winners over a shattered Wexford. Rarely has an opening round of the Leinster football championship served up such drama.

When Donie Kingston converted his 69th-minute penalty to bring the sides level at 1-14 to 1-14, extra-time beckoned. But there was still time for more thrills and spills as Wexford were awarded a penalty of their own deep into stoppage time when Brian Malone was fouled. Donie Shanley decided to point the penalty seemingly doing enough to secure a shock result, but Wexford were unable to prevent one last Laois surge which saw corner-back Gareth Dillon kicking the levelling point five minutes into additional time.

With Wexford shattered, Laois steadied the ship in extra-time, notching 1-2 inside four minutes to effectively decide an enthralling contest.

“We really did that the difficult way,” a relieved John Sugrue explained afterwards. “In the league, we were looking at results, getting results, but after that opening 35 minutes a result did not really look on, trailing by 10 points at half-time.”

“It was a mammoth ask of the players,” added the Laois manager. “Credit to the players for that second-half display and their control of extra-time. We played it more direct in the second half, with Donie Kingston inside. The long ball inside, he dominated, leading to crucial scores.

“We played really good football in that second half but to be brutally honest we felt we had left ourselves too much to do. This will be a huge learning curve, but we won today, we won’t get carried away, and now we look forward to Westmeath.”

Wexford boss Paul McLoughlin was understandably devastated with the result.

“I don’t think anyone is going to be happy with the result. We coughed up a 10-point half-time lead, we coughed up a point lead in the fifth minute of additional time, but having said that I’m proud of the effort the players put in.

“We finished that game with seven championship debutants. We had a stranglehold on that game in the first half, should have been able to protect the lead, but that’s when our lack of experience showed. We now look forward to a favourable draw in the qualifiers.”

Wexford delivered a devastating first-half display in front of an attendance of 2,600, at the end of which they led 1-10 to 0-3. With their quick attacking play stretching the Laois defence, they raced into a 0-8 to 0-0 lead with Daithi Waters getting the hosts off to the ideal start with a point inside 16 seconds. John Tubritt, Glen Malone and the freetaking of Shanley helped Wexford stretch that advantage and they picked off some wonderful points with Laois having to wait until the 23rd minute for their opening score.

Laois wing-back Stephen Attride kicked the opening point of the second half, with Conway and Kingston adding further points, but it was the switch of Kingston to a role closer to goal that turned the tide for Sugrue’s side.

With Kingston picking off points from play and frees, Laois gradually hauled themselves back into the game. And although Damien O’Connor fluffed a goal chance wide, when Tubrit’s fifth point made it a three point gain, Kingston made no mistake from the spot before both sides exchanged scores in stoppage time.

And it was Laois who kicked on in extra-time, completing a remarkable 16-point turnaround to set up a second-round meeting with Westmeath.