‘Out-dated, outmoded, and turning people off’: Niall Moyna on championship 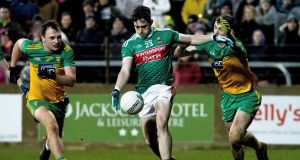 It’s just over a year since Niall Moyna predicted the “death knell” for Gaelic football, in part because of his growing frustration with the style of football being played at college competitions such as the Sigerson Cup. But he is a little more cheerful this weather.

Last year Moyna also stepped away after 18 years of uninterrupted coaching at Dublin City University (DCU), where he is head of the School of Health and Human Performance. During that time he won four Sigerson Cups, as well as being part of the Dublin backroom team that helped claim the breakthrough 2011 All-Ireland under manager Pat Gilroy.

“When I said that last year [about Gaelic football], I was really referring to championship,” says Moyna. “Look at start of the football league on Sunday, the Division One games: outside the Meath-Tyrone game, every game was a draw or one-point difference. Same in Division Two. I looked at the average winning score from the first round last year, it was 2.4 points.

“Why? Because you’re competing against teams of similar ability. The championship is totally out-dated, outmoded, and so is the provincial championship. And it’s turning people off. They’re coming in their thousands to watch national league games, because of the quality.

“But if you look at the championship, you’re very lucky to get four good games the whole championship. Every game at the weekend was a competitive game. I’d go to a Division Four game in the league, because you’re going to see a competitive game. It’s not the same standard as Division One, but it’s competitive, and that’s what people want to see. Not some team having to put 15 men behind the ball because they’re being totally out-classed by a much superior team. And that’s the issue that has to be seriously addressed.”

Moyna’s enthusiasm has also been renewed in other ways too.

“Well, I started getting involved again. Pat Gilroy asked myself and Mickey Whelan to get involved with the St Vincent’s under-21s, at the end of the year, so that sort of got me back in again.”

The Sigerson Cup is an amazing competition, I was involved for 18 years, and saw the impact that it had

However, he still has his issues with the Sigerson Cup, especially with the under-20 football championship effectively being dumped in on top of it.

“I also think now, for the most part, the inter-county managers have unfettered access to their players for most of the year. After the Sigerson is over, the clubs don’t even get them.

“Now, to placate the inter-county managers, they’ve squeezed it [the Sigerson] into the month of January. Now we were very lucky this January with good weather; what happens if it’s snowy and sleeting and matches are postponed?

“And I think the inter-county managers are being extremely unreasonable. This is an amazing competition, I was involved for 18 years, and saw the impact that it had. I had Dublin players who between them have probably won over 70 medals by now, and they will tell you the Sigerson was the foundation stone for their career. And for many players – and inter-county managers from particularly the weaker counties should appreciate this – it’s the one chance to win a national title.

“It’s their one chance, at a high level, to play with people from other counties. And I know from my own college experience, they are the friends I’ve had for the rest of my life. And I think inter-county managers and county boards are being unreasonable and unfair.

“I sat on the committee that changed the age groups, and that’s something we need to go back and look at again, the whole under-20 or under-21, and what it’s played as well. They seem to have got the hurling right, it starts later, and they get the final played later in the year, and maybe we need to look at a similar model in football.”

Donegal’s 2012 All-Ireland winner Leo McLoone has confirmed his retirement, the 31 year-old stepping away at the start of the season, according to manager Declan Bonner. McLoone played in a variety of positions, also won five Ulster SFC titles, making his debut as an 18-year-old in 2008 against Mayo in Castlebar, and in the end played over 100 times for the county.

1 Mickey Harte is the new Louth football manager
2 Here is your handy guide to sport on television this week
3 Crowds of 4,000 to return to sporting events in England from next week
4 Every kind of wind imaginable was against Tipperary football - and they came through
5 Munster beat Glasgow to keep their winning streak going
Real news has value SUBSCRIBE