Opportunity knocks at just the wrong time for Tipperary 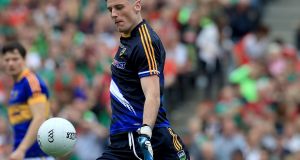 In a way, it’s the worst of times to be having the best of times. For Tipperary football, a chance like tonight’s in Páirc Uí Rinn comes around once in a generation.

Cork are hanging like a wooden gate in a gale, aching for someone to knock them off their hinges and get it over with. If Tipp were heading south in the full of their health, they would be favourites to complete back-to-back wins in the fixture for the first time since 1940.

But they’re not. And they’re not. Injury to Ciaran McDonald, an International Rules veteran and one of the best defenders in Munster, means he may not be back this year, if at all. Philip Austin’s hamstring went a fortnight ago. The suspension of goalkeeper Evan Comerford is a self-inflicted wound they couldn’t afford. Willie Connors, Jack Kennedy and Emmet Moloney have all been hurt since the league final.

And all that’s without idly wondering what they wouldn’t give for seats on the bus to be filled by any of Peter Acheson, Steven O’Brien, Séamus Kennedy or Colin O’Riordan, all of them lured away to variously different lives.

It’s all too typical of the fortunes of Tipperary football to be holed below the waterline like this at just the time when Cork look to be there for the taking.

The two teams are self-evidently moving in different directions. They will meet in Division Two next year, Tipp there as Division Three champions, Cork trapped there in their own mediocrity.

All-Ireland semi-finalists last year, Tipperary’s list of scalps in the past three seasons includes Cork, Galway, Derry and Laois, all of whom were in Division One or Two when they beat them. Cork haven’t beaten a team above Division Three or Four level since 2013.

On top of which, Cork go in here short of players themselves. Aidan Walsh and Alan O’Connor were casualties of the close shave against Waterford, Walsh to injury, O’Connor to suspension.

Tom Clancy – the Clonakilty one – is out as well with a foot complaint. Paddy Kelly, Daniel Goulding and Fintan Goold all walked over the winter. Brick by brick, the old pillars of Cork football fall away.

But much apart from Cork’s reduced state, there’s another imperative on Tipperary just now. Time is pressing on. For all the dark tidings about the state of Cork football, nobody really believes they will be down forever.

Sheer weight of numbers will bring them back up in time, maybe not for a few years but eventually. The advent of the Super 8s from next year will naturally bring the bigger counties to the fore and Cork, for all their woes, are one of those.

For Tipperary, the only certainty is that gravity will get them. To be involved in Tipperary football is to know the natural wastage that spirits the likes of Acheson, O’Riordan, O’Brien and Kennedy away. Just a fact of life, that’s all.

To counter it, the underage work in the county has been stellar over the past decade, a rival to any full-time football county. But on the ground, they know it won’t last forever and admit privately that there isn’t a batch coming through to take over from the current senior side.

Results at minor and under-21 level have tailed off significantly over the past two seasons. After a period in which they made six Munster minor finals in 10 years and seven under-21 deciders in nine, they haven’t been relevant in either competition recently.

At minor level, they’ve lost to Clare and Limerick over in the last two years and their under-21s went down to Limerick at the first hurdle back in March. They haven’t beaten Kerry at minor or under-21 since 2012.

So this is who they are. And, give or take, it’s who they’re going to be. That’s what makes tonight such an acute opportunity. Beat Cork and they’re guaranteed a last-12 spot. Given that the B side of the qualifiers is significantly less shark-ridden than the A side, their chances of making it back to Croke Park would sky-rocket accordingly.

They would obviously prefer not to be going to Páirc Uí Rinn with four debutants in the side. Of all the absences, Comerford’s could prove the most critical. They’ve leaned so heavily on his kick-outs that understudy Ciarán Kenrick didn’t see a minute’s action in the league. Not ideal.

But then, this is Tipperary football. When has it ever been?

Tyson Fury’s best chance is to do what Ali did better than anyone: dance 17:59
Federer knee surgery sparks fears that time is running out 17:38
England coach Eddie Jones apologises after making ‘half-Asian’ comment 16:39
Alessandro Zanni returns to Italy side for Rome clash with Scotland 15:40
Liverpool’s Klopp responds to Donegal schoolboy who asks him to stop winning 15:29
Here is your handy guide to sport on television this week