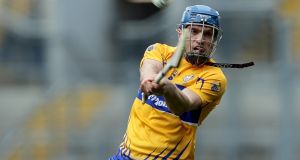 Shane O’Donnell: back in the Clare fold in advance of the championship which starts next month with a visit to Waterford. Photograph: Laszlo Geczo/Inpho

Given his speed and diminutive proportions, Anthony Daly’s description of Shane O’Donnell’s hurling style as like a greyhound chasing a hare is fitting.

Daly, the former Clare manager who captained his county to two All-Ireland titles, isn’t poking fun at the Ennis phenom and means it in the best possible way.

In fact, it’s the return of the Fulbright Scholarship recipient from a period at Harvard University that has filled Daly with fresh hope about the Championship.

Attacker O’Donnell, who will forever be remembered for his 3-3 blitzkrieg in the 2013 All-Ireland final replay win, missed all of the league but has since returned to county training.

“A huge boost, massive, and the loss of him as well was as big,” said Daly at the launch of the Renault World Games 2019 at the Waterford IT sports arena.

“In certain league games that I got to see live, the loss of him was big. Poor auld Shane, after getting the 3-3 in 2013, there are fellas who wouldn’t know their hurling, with due respect, and they thought this 3-3 should be coming the whole time.

“That doesn’t happen at this level. That was a freakish day. But Shane’s work rate, ask anyone that marks him, his ball retention when it goes up to him and his willingness to fight for it, it’s massive.

“Clare need him, they need Peter Duggan hitting form, they need John Conlon right, they need Aron Shanagher back, and he is back and going well I believe. Look, if Clare get everyone on the pitch, you’d be optimistic.”

Clare showed the best and worst of themselves in the Allianz league, beating Kilkenny and Wexford and drawing with Limerick before suffering a heavy quarter-final defeat to Waterford at Walsh Park.

That’s the same team they play in the Munster championship on May 12th at the same venue. Returning O’Donnell to peak physical condition for that game should be high on Clare’s agenda, according to Daly, though he’s concerned about the effect the time away will have on the Éire Óg man.

“It must have been very hard to hurl in Boston, where he was,” said Daly. “Funnily enough, in my time in management with Clare, a very similar thing occurred with Tony Griffin who was in college in Canada.

“I flew Griff home for four league games. We used to fly him in through London of a Thursday and he’d play and fly back out on a Sunday night to London, then London to Newfoundland, or Boston up to Newfoundland.

“For four league games he came home both years, ’05 and ’06. I just felt it was crucial to keep his eye in. Because Newfoundland is cold enough, and Boston is cold enough in the winter too.”

Aside from O’Donnell’s sharpness, Daly is concerned he may pick up an injury in the coming weeks.

“He’ll go for everything, he’s like a real genuine greyhound, he won’t be wondering if the hare is up in front of him, he’ll be going for that ball,” said Daly.

“Shane will bring that, that’s the one guarantee. The big thing I’d be worried about is that – and I know he was training over there, he’d been working on a programme and sticking to that – but when you come back home it’s another step up, you have to say. You’d just be worried about an injury over the next couple of weeks.

“Let’s face it, over the next couple of weeks in training you’re going to have to go hammer and tongs. There’ll be A and B matches. You’re probably going to have to play a Galway or Wexford, maybe Kilkenny or someone in Leinster. That’s the thing, that he’d come through those games.”

* The Renault GAA World Games 2019 will be played at the Waterford IT Arena from July 28th to August 1st. The finals will take place at Croke Park on August 2nd.