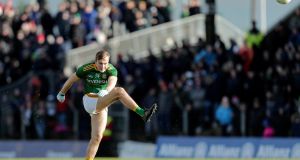 Meath’s Shane Walsh: the forward will be absent from the Dublin game. Photograph: Laszlo Geczo/Inpho

The hope was that by mixing it with the eight best teams in the country they could bring a higher standard into the championship. In reality, Meath football might well feel as far away from that top table as it has ever been.

There will be no hiding from that in Sunday’s penultimate round of the league against Dublin at Croke Park – a game some Meath supporters might actually prefer was played behind closed doors. After five rounds the only certainty in division one is that Meath are already relegated back to Division Two.

After taking 13 seasons to get back up there, they’re playing for nothing more now than pride, although Dublin won’t have much sympathy: currently on six points, one behind Kerry and two behind Galway, they’re still playing for a place in the final, with Galway to come in the final round.

There’s no hiding too from the fact the last time they played in Croke Park in the 2019 Leinster final, Dublin beat Meath 1-17 to 0-4.

Meath may still be the last county to actually beat Dublin in the Leinster football championship, 10 years ago this summer, in the 2010 Leinster semi-final, hitting them were it hurts with five goals to none (5-9 to 0-13), only that seems very far away now.

The last league clash between Meath and Dublin was in Parnell Park in 2008, back in their more fiery days, both teams actually operating in Division Two: Dublin won by 0-13 to Meath’s 2-6, with five players sent off (Dublin’s Bernard Brogan, Paddy Andrews, Ciaran Whelan and Meath’s Niall McKeigue and Shane McAnarney) and 11 others booked.

Dublin were promoted that season, and have won the nine successive Leinster titles after Meath’s last win in 2010, plus seven All-Irelands. Meath were relegated from the old Division 1B back in 2006, with the likes of Graham Geraghty still on board, and had fallen either short or a little long of promotion back to division one in 12 seasons, before 2019 proved the lucky 13th.

Geraghty has his own thoughts on Meath’s fall from grace, part of the reminder coming with Allianz renewing its sponsorship of the football and hurling league, beginning when Meath last won the football league title outright in 1993-94.

“No, there’s no point sugar-coating it,” said Geraghty. “We’re struggling in Division One, being competitive, but not being able to get across the line which is worrying. Looking at the early part, you’d have targeted Tyrone up there, and the game against Mayo was disappointing, a game we had in the bag we let slip.

“So that’s two or three points we could have had, and it’s so tight there in Division One at the minute three points might keep you up.

“But over the last few years we haven’t developed underage teams that can win All-Irelands. The last one that we won was when we were playing, in 1993, under-21 at that stage.

“We’ve won a few minors, but it’s a long time since we’ve won anything underage. I know Andy McEntee got us to a minor final in 2012, but looking at the club scene it’s hard to tell where the players are coming from.

“We came off the back of a very good underage system. We won a minor in 1990 and another one in 1992, an under-21 All-Ireland in 1993, so we had that batch of players coming through to a Meath team coming to the end of that era.”

Injury hasn’t helped Meath’s cause: first choice goalkeeper Andy Colgan has been out since injuring his knee in the warm-up to their league opener against Tyrone, and the absence of forwards Mickey Newman, Shane Walsh and Donal Lenihan certainly hasn’t improved their scoring power.

Still Geraghty wonders if Meath can ever close that gap on Dublin again.

“I suppose they [Dublin] have only 15 players, the same as everybody else, but I think Dublin waited so long to get success. When they have it then, when you’re winning games, whether it’s soccer, basketball or different sports, everybody wants to play for Dublin. Half of the Dubs living in Meath want to play for them now.

“But we can’t get away from the money end as well. It just gives them the ability to be able to have the best of everything, trainers, nutritionists. Every county has them, but it’s the fact that most club teams in Dublin now have a couple of full-time coaches as well. And you can see this just hasn’t happened over the last number of years, it’s just developed and developed, and they have sustained it.

“But I think the one thing that probably would upset me more is where you have young kids living in Meath, that are playing club football in Meath, and opting to play for Dublin or where they’re from originally.

“We’re a big enough county that we can cope with that, but I think at the minute we don’t have the players. If you look at club level we’re not playing a good brand of football in Meath at the minute to warrant us winning Leinster finals and going on.

“With Meath-Dublin games in the past., you’d be waiting all week for them. Now it’s will we put it up to them for 50 minutes?

“It’s disappointing for the older supporters in Meath who would remember those games. Whether you won or lost you always had a battle. Sometimes the football mightn’t have been the best but it was always close, and something was going on somewhere on the pitch.”