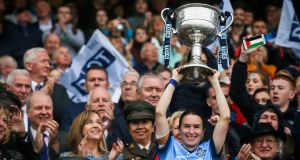 Maria Kinsella, the chairwoman of the Women’s Gaelic Players Association, has described as “increasingly unsustainable” the demands placed on female intercounty footballers and camogie players, their new ‘Levelling the Field’ report revealing continuing major disparities between the financial strains experienced by male and female players.

While male players receive a 50 cent mileage allowance, reduced from 65 cent earlier this month due to the impact on the GAA of the Covid crisis, just seven per cent of female players receive any form of travel expenses. On average they spend €55 a week on fuel going to and from training, with some spending as much as €200.

More than 500 players responded to a WGPA survey that set out to gauge what progress has been made since their ‘Making Things Better’ report in 2014, and while over 90 per cent agreed that general standards had improved, thanks largely to the Government Grant Scheme introduced in 2017, the financial demands in particular remain significant.

The average round-trip for players to training sessions was 80km, undertaken three times a week, with some players driving over 2,400km a month, with no expenses covered.

In response to these findings, the WGPA will seek from the government an increase in funding which, at the moment, is less than a quarter of that received by their male counterparts - €3m versus €700,000 in 2019.

They will look for the introduction of an expenses system similar to the one the Gaelic Players Association secured for its members, while also seeking to form closer links with the GPA “to strengthen the voice” of both male and female players.

“These findings clearly demonstrate the increasingly unsustainable demands of the female intercounty games,” said Kinsella. “Players invest a significant amount of time and energy in order to represent their county but yet are consistently at a financial loss paying for fuel, medical expenses, gym access and playing equipment. It has become increasingly challenging for players to meet these costs.”

“We fully appreciate there are no short term solutions to a lot of the issues identified and on the back of a trying year, it will be a challenge for us all to ensure that the interests of female players remain on the agenda as we rebuild. We look forward to working with our partners and players to achieve the aims outlined.”

The report also included findings that outlined the impact of an intercounty career on the lives of players, most of whom train five to six days a week, with 74 per cent stating that they are so tired from the mental demands of their sport that they struggle with their work or studies. On average, between travel and training, 3.7 hours a day is taken up by their sport.

Despite the demands, Dublin football captain Sinéad Aherne insists that a passion for their sport keeps players involved, and that all they want is parity when it comes to the support they receive.

“For all the challenges, players continue to love playing for their county and representing their clubs and families on the biggest stage,” she said. “All players are seeking is an equality of opportunity, an equal footing to allow us to perform to the best of our potential. Enhanced investment will lead to higher standards for players, a better quality product which is more attractive to supporters and sponsors alike ultimately, the continued growth of our games.”