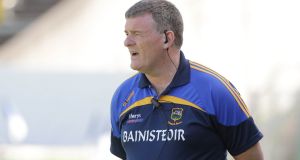 Liam Kearns: “Unless they sell it properly, approach it properly, and do it the right way, I don’t think the players will buy into it.” Photograph: Morgan Treacy/Inpho

As the prospect of a Tier 2 football championship comes back into view, regardless of how competitive the 2019 campaign turns out to be, some questions and doubts remain.

Liam Kearns certainly has his. Heading into his fourth championship campaign as Tipperary football manager, Kearns has experience at both ends of the championship, seeing how so-called weaker teams can enjoy extended runs some summers, less so in others.

That’s after guiding Tipperary to the exalted heights of the All-Ireland semi-final in 2016, where they lost to Mayo. He’s also previously managed Laois and also Limerick. With the latter he lost the Munster final to his native Kerry, back in 2004, after a replay.

“My view is any county can sort themselves out and go on to compete, and most players want to compete in the All-Ireland,” says Kearns. “So I don’t know if the appetite is there.

“I know from managing Tipperary to an All-Ireland semi-final, managing Limerick to compete with Kerry in Munster, when they won the All-Ireland, it is possible.   “We are hearing about the Tier 2, but if they don’also have the All Stars, the trips abroad, treat the players the exact same as they do the championship proper, then maybe you will find players showing interest, and it might become something proper. But they’re not committing to that, and it depends very much on how they approach it.”

The counties likely to be involved met with GAA officials earlier this month. GAA president John Horan has already outlined his hopes that a proposal for a new Tier 2 football championship can be brought before a Special Congress later this year. If passed, it would be in running in 2020.

There are currently two proposals in the works, the first of which would see all counties play in their provincial championships.

“I think if they approach it properly, it could work,” adds Kearns, “but if it isn’t, and treated as second class, I don’t think the players will have any appetite for it. That’s dealing with the players I’ve dealt with it.

“I know when we barely survived in Division Three of the league, we lost four or five to Australia, and they weren’t talking about beating Cork in Munster that year, and then we did. We lost to Kerry, then we beat Derry, and we beat Galway, and held our own against Mayo. So it can be done, and that was done only three years ago. And we only used 16 or 17 players.

“But unless they sell it properly, approach it properly, and do it the right way, I don’t think the players will buy into it. If they treat it like the secondary hurling competitions and that, it won’t work. That would be my fear.

“I also think the whole fixture thing needs to be looked at, from the start to finish. Everyone has their own agenda, in relation to different competitions, and until someone comes in, and calls it like it should be, with players at the forefront of their interests, then I think you’ve got a problem. Because there is a lot of talk about it.”

Two previous incarnations of a secondary football competition faded: the ‘B’ All-Ireland abandoned after 2000, Fermanagh beating Wicklow in the 2000 final, while the Tommy Murphy Cup,introduced in 2004 on the initiative of then GAA president Seán Kelly, also gradually slipped away.

Meanwhile, Dublin’s quest to win a record fifth successive All-Ireland will now likely include Rory O’Carroll, who rejoined the panel this week, having left for  New Zealand in early 2016, before returning home in March.

At 29, he’s already displayed his old defensive qualities for Kilmacud Crokes and Dublin manager Jim Gavin was always likely to recall the three-time All-Ireland winner and two-time All Star to the county fold.