New York’s footballers have made the Bronx frightening once again 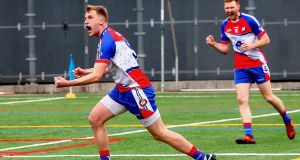 For years, New York’s role in the All-Ireland football championship was to provide a flash-in-the-pan overseas appearance and then disappear.

Since their return to the big competition in 1999, the American team are zero-and-twenty. But in recent years, there’s an alternative and highly plausible scenario in which they reside unbeaten in Gaelic Park for the last three years.

A year ago, Leitrim squeezed past after extra time in an encounter which made for riveting radio coverage in Ireland. In 2017, the home team led Sligo with just twenty minutes to go. And in 2016, Roscommon, after a dashing division one league season, just about got out with their hides intact and a one point win, 0-17 to 1-15.

They have made the Bronx frightening once again. It’s just New York’s tough luck that next up on the revolving cast of Connacht visitors is Mayo, the new league champions and, as they say out in the surf breaks of Rockaway, as gnarly as they come. But its not an assignment that the New Yorkers will wilt from.

The chief obstacle to the progression of New York teams is insurmountable; they don’t have enough teams to play against

“It is a huge task, “acknowledges Justin O’Halloran, the understated Cavan man who has been in charge for those hard fought encounters of the past three years.

“Mayo have the youth and experience and realistically it is going to be difficult. We still have to have a winning attitude. I can’t tell the fellas: yeah, we are definitely going to win. But the attitude is important because we have some good footballers and a good bond.

“They will try their best. Mayo could go out against 20 different county teams in Ireland and win by 10 of 15 points. So it is not going to be easy, but I imagine it is going to be a competitive game.”

The word is that a strong Mayo contingent is heading across the Atlantic to make a holiday out of the county’s first outing of the All-Ireland campaign. A fundraising dinner has been organised for Manhattan. It will be a big Mayo weekend in the metropolis. Championship day is New York’s day in the sun.

“For the majority of people in New York it is the only championship game they will get to see live all year. So it is home away from home in Gaelic Park,” says Simon Gillespie, the Development Officer for New York GAA.

Last week saw a landmark transformation in Gaelic Park when the low-ceiling, shambling and iconic bar was demolished. If walls could talk, that building would have had a lot of tales.

But the clearance is the latest step forward in the completion of a brand new function room and team facilities at the venue. For decades, New York’s on-field fortunes fluctuated according to the economy. When Ireland hit a low, so the options of inter-county calibre footballers in New York would swell.

When Ireland prospered, New York teams weakened. Justin O’Halloran was part of the New York squad that re-entered the Connacht championship under a blaze of publicity in 1999 for a championship match in Castlebar. As it happened, an injury stopped him from travelling.

“It might have been a good thing as my visa status was uncertain at that time,” he says now.

But the visitors had a good team then and looked as if they belonged on the field against Mayo that day and have had chances to record a championship win in the two decades since. The chief obstacle to the progression of New York teams is insurmountable; they don’t have enough teams to play against.

Entering the league is a financial and logistical impossibility. For the past four years, O’Halloran has put a squad together in January. Logistically, it is demanding and unforgiving. The boroughs are in the grip of mid-winter and the outdoor training is not pleasant. O’Halloran’s drive to Gaelic Park coincides with rush hour, putting an extra hour on the journey. But the biggest hurdle is that the New Yorkers effectively train in isolation for six months. While other teams prepare for the league, they spent months waiting for this one day in May.

“I really don’t know why!” O’Halloran laughs when asked what draws him to the role.

They train together Tuesdays, Thursdays and Sundays. The migratory composition of the dressing room is part of the New York football culture. It’s not something that pre-occupies him.

Since last year, New York have lost a thoroughbred attacking talent in Jamie Clarke. Former Mayo stalwart Tom Cunniffe is not playing. Donal Ward, the former Roscommon player, has spent the spring boxing in the Golden Gloves. Neil Collins, another experienced Roscommon defender, is immersed in his career as a fashion designer. Kildare’s Daniel Flynn spent the early part of the year training with the team but has since returned to Ireland. For O’Halloran, it is simply a matter of working with whoever is there.

“It is a big disadvantage if you are playing more games and have a game plan that players adapt to or a system. But because we don’t have those games, it is different. We don’t get too technical or complicated and we just set out how we would like to play.”

Emotions can shift in Gaelic Park

The big change over the two decades lies in the increase in American-born players appearing in New York teams. O’Halloran has seven local players in his squad for next Sunday night’s game. Shane Hogan and veteran corner back Mike Regan have been regular starters and the manager is excited by younger talents that are coming through. It corresponds with the year round work carried out by New York so that as an entity it becomes less depend on blue-chip players dropping in and out of city life.

Sunday next will be showcase of sorts of what’s going on in the American game, with a series of games featuring a men’s development squad, ladies football teams from Charlotte and New York and local hurling teams preceding the main event.

“The goal is to have American teams taking on Irish teams,” says Simon Gillespie.

“It is a two strand strategy where they are good when it comes to taking on Irish teams. That is what we are aspiring to. There may be a second tier championship at home and we want to compete in that. We are showing we can compete at that level. The game next weekend is definitely tough: how many division four teams could compete with Mayo just now?”

Still, James Horan’s championship tenure started with a nerve-wracking encounter with London in Ruislip in 2011. He knows the pitfalls of these overseas encounters, where it is taken for granted that the Irish side will win. And emotions can shift in Gaelic Park.

O’Halloran remembers how in the first half of their Roscommon game in 2016, the majority of the cheering was for Roscommon. But with 15 minutes remaining, even some of those wearing Primrose shirts got behind New York’s storming effort to cause the biggest upset of the year.

He knows that nothing will sway the loyalty of the Mayo-ites living in New York but if the locals can give the league champions a scare for a day, then the short, intense season-in-a-day will be worthwhile.