Keane reflects on championship expectations and learning from defeat to Mayo 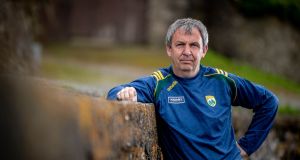 Peter Keane: ‘I suppose at the time, in 1982, I remember Mick O’Dwyer saying he felt like there were 31 counties against Kerry.’ Photograph: Morgan Treacy/Inpho

Even if still relatively fresh into his first season as Kerry football manager it’s not long before Peter Keane is asked about the great weight of history bearing down on the 2019 championship. It’s as obvious as it is unavoidable.

Not on Kerry, not so much this year anyway, but rather on Dublin, given their quest to win that elusive fifth successive All-Ireland title this summer – never before achieved in the senior men’s game. Keane only briefly hesitates.

“Obviously it’s history,” said Keane. “I remember as a youngster being above in Croke Park in 1982, when it didn’t happen for Kerry (losing to Offaly), and that was a huge thing at the time. You talk to a lot of Kerry players from the day, and some of them will say maybe they just froze, or things didn’t just run their way on the day.

“And the closer it came, the more difficult it got. I can’t speak for Dublin, but it is history in the making, if they are going to win five. It doesn’t come around very often, but you don’t get there in the position by being a bad team, and it’s not like they got there by some lucky break. They’re won four championships in a row, so to be knocking on the door for five, you’ve got to be a very, very good team.

“But again, it is history, no different to Kilkenny in 2010, when they lost the five. I suppose at the time, in 1982, I remember Mick O’Dwyer saying he felt like there were 31 counties against Kerry. And you can probably see where people like change, but they do like a history of things too, that a team were able to do that.”

Speaking in Dungarvan at the launch of the 2019 Munster Championship, Keane also spoke about his own championship expectations, and suggested the league final defeat to Mayo was all part of the learning experience.

“There was a brand new management, a lot of senior players that retired, a lot of new players who came in, so you throw all that into the pot, mix it up. Was I gutted after losing the league final? I wasn’t, because it was a plus in getting to Croke Park, stay overnight. Would I have rather have won? Yeah, but sometimes you look at it with a closer eye when you lose.”

Cork remain the last team to beat Kerry in Munster, in the 2012 semi-final, only for manager Ronan McCarthy, relegated to division three in this year’s league, expectations are entirely different.

It’s easy to say this is wrong and that is wrong, but what solution are you offering?

“Even if we weren’t involved in relegation, it’s a tough league anyway,” he said. “If you are playing a Sunday you might be out the following Saturday and trying to get a session in on the Tuesday night, trying to get weights in and it is really intense.

“The advantage of the championship is that you have more time to prepare your run-in to the game and so on, to look at your opposition and everything else. There is probably more pressure in terms of the importance of the competition, but more time to prepare which makes it slightly easier.”

McCarthy also admitted it was sometimes hard to avoid all the negative criticism around Cork football: “I had to protect myself first maybe!

“Look, not really. You see one of the things here is, some people are out just to have a go, and there are people who are making comments who are people with a good knowledge of the game and good insight into the game. You wouldn’t have to agree, but you wouldn’t be stupid enough to ignore what everybody is saying. Whether you are winning or losing, your advice to players now would be to stay off social media and stay away from it basically. If they follow that, be it positive or negative comments they won’t get too fazed either way.

“I liken it to a father-in-law at a wedding, not everyone wants to listen to him, but you have to give him the mic sometimes. Some people have put some thought into it, and their comments are justified and so on. I always look at these things and say ‘what solutions are people providing?’ It’s easy to say this is wrong and that is wrong, but what solution are you offering? A lot of the time what you see is they are not offering anything.”