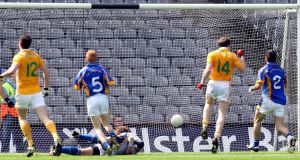 Moves towards a Tier 2 football championship quickened this week with a meeting in Croke Park, attended by the counties likely to be involved in such a departure – those from Divisions Three and Four. Two options for the proposed competition have been circulated to the counties with a view to bringing the more popular one to a special congress next autumn.

Division Three is likely to be defined as that constituted by the end of the league and this year that would mean Cork and Tipperary, the counties relegated from Division Two, and not Westmeath and Laois, who travelled in the other direction.

The choice is between a competition that begins as soon as counties are defeated in the provincial championships – unless they qualify for the final in which case they stay involved in the Sam Maguire – and one that allows counties to contest one or two rounds of the All-Ireland qualifiers.

Those at Monday’s meeting appeared more favourably disposed towards the former although support for the latter was more pronounced amongst the player representatives, who attended on behalf of the counties along with their Central Council delegates.

Developments are marking quite a turnaround from just three years ago when Croke Park had to pull a motion on a proposed ‘B’ All-Ireland, restricted to Division Four counties, at the very start of the 2016 annual congress in Carlow. Part of the influence on that decision was the implacable opposition of the counties concerned and also the Gaelic Players Association.

By last November, the GPA signalled a change of mind on foot of a survey, indicating that 60 per cent of footballers now support the concept of a Tier 2 championship.

Amongst the findings were that 90 per cent of hurlers were happy that they had sufficient matches against teams of equal standard – unsurprisingly, as there are now five different championship tiers in the game – whereas the comparable figure for footballers was 53 per cent.

Counties have also begun to see the merit in the idea. Wicklow were early advocates of the competition and submitted detailed proposals last autumn, including the stipulation that counties entering the new championship would not contest the qualifiers.

There was irony in this because when the GAA previously attempted to introduce this type of streaming by directing all Division Four counties straight into the Tommy Murphy Cup and not allowing them to enter the qualifiers, it was a Wicklow motion that reversed the decision in 2008.

There was vindication when in 2009 Wicklow enjoyed its most successful season in the qualifiers, reaching the fourth round at which stage they lost to Kildare.

The county’s Central Council delegate Martin Coleman says that the unhappiness in the county wasn’t based on objecting to the idea of a Tier 2 competition and also explains the current rationale.

“We weren’t against the Tommy Murphy Cup, just the way it was scheduled and the complete lack of promotion. We were lucky enough to get to two finals and we had to play when there was only seagulls in Croke Park. The plans for this are better. This is giving every county in Division Three and Four a chance.

“The way I look at it is that if you get a fairly substantial beating in the province and then go into the qualifiers and get another beating, the attitude isn’t going to be right going into another competition.”

The question of profile frequently arises when Tier 2 championships are debated. As Coleman recounts, the Murphy Cup might have been played on the same bill as big matches in Croke Park but generally so early in the day that few apart from the counties involved were in attendance.

Securing dates for the new competition will be a challenge, as the GAA currently operates a very condensed calendar of matches in order to clear the way for additional weekends for club activity.

The GAA view is however that it should be possible to utilise the spare fixture space generated by the reduction in qualifier matches and maybe even find a stand-alone Sunday for a semi-finals double bill at Croke Park.

Whether this would guarantee media coverage is moot. Sceptical players point to the relative obscurity of even the most advanced graded championships in hurling, the Ring and McDonagh Cups, as an example of how Tier 2 competitions can slip off the radar.

Another of the main objections to filtering Division Three and Four counties out of the qualifiers is that it would slam the door on some of the most romantic achievements in qualifiers-era football. Counties like Wexford and Tipperary reached All-Ireland semi-finals, having come from Division Three but such feats were rarities.

On average just one county per annum from outside of the league’s top 16 has reached the last eight of the All-Ireland football championship since the quarter-finals were introduced in 2001.

Shane Mulligan played for Longford for 10 years before stepping down four seasons ago and last year enjoyed an historic provincial title with his club, Mullinalaghta.

“I understand why players want that opportunity, one crack at it because on any given day, a result can go any way. That’s a draw for players in a summer championship. There are pros and cons.”

He believes though that a Tier 2 structure would benefit counties like his by providing a more competitive schedule and a more orderly pathway to improvement and holds that view despite having played in a number of Longford’s great giantkilling displays in the qualifiers, days when Mayo and Derry were beaten and Kerry given a rattle.

“Yeah. I think there’s definitely a debate to be had. I’m looking back having played 10 years and gone through it and personally, my best memories were of those competitive days – we had some great Division Three finals in Croke Park – and I know we had some huge upsets when we took big scalps on a given day but I think it’s about progression because it was too topsy-turvy to get a big result and then go to a poor performance against a lesser team."

Liverpool reverse decision to use government furlough scheme 18:55
McLaren boss warns coronavirus impact could threaten Formula One 18:45
New PGA Tour schedule could bring an end to the year like no other 18:42
Jones says new players will form 60 per cent of England’s next World Cup squad 18:30
Travel restrictions could hit Ireland hard when racing returns 17:34
Crossword Get access to over 6,000 interactive crosswords