Monaghan and Mayo face off with relegation a real prospect 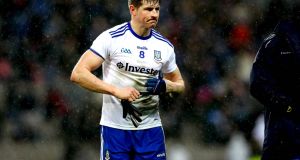 Monaghan’s Darren Hughes: “We’ve had a few decent performances, but haven’t always gotten the results to reward them. That’s Division One football for you.” Photograph: Ryan Byrne/Inpho

This weekend marks the half-way stage for the football league and already there is a focus on Division One survival. The outlook is unpromising for newly promoted Meath, who have lost their opening three fixtures, most recently and agonisingly to a late goal against Mayo.

With trips to come to both All-Ireland finalists, Kerry and Dublin, Andy McEntee’s team are already under pressure to stay up.

Above them is an ostensibly tightly packed table with three teams on four points and four on three. Two of the latter meet at the weekend and whoever loses between Monaghan and Mayo faces an anxious last three weeks.

Mayo manager James Horan has been juggling injuries while giving a chance to new talent and although they are the title holders, results have been dependent on late scores.

For Monaghan it’s a bit frustrating as two more points scored over their campaign would actually have them topping the table on three wins out of three. A one-point defeat in Salthill by Galway and the recent evaporation of a big lead against Dublin, resulting in a draw, cost them dearly.

“We haven’t got the points on the board we maybe should have,” said veteran centrefielder Darren Hughes, 33 next Friday, who missed four months last year with a bad ankle injury. “We’ve had a few decent performances, but haven’t always gotten the results to reward them. That’s Division One football for you.”

The county said its goodbyes to manager Malachy O’Rourke after seven good years, including two Ulster titles and an All-Ireland semi-final appearance.

End of an era

The temptation to mark the end of an era was there and two outstanding servants of the county footballers, Vinny Corey and Dessie Mone, called it a day.

“For the rest of us in our early 30s,” according to Hughes, “there was never any doubt. Banty (McEnaney) rang us and there was no retirement talk or anything like that there. It was, ‘when are we getting back and what’s the plan?’ sort of a thing.”

Former manager Séamus McEnaney returned, bringing a highly regarded backroom team and despite fears that the team might settle into decline, performances have been encouraging, if not as productive as deserved.

“He’s back now and has really invigorated the whole thing,” said Hughes. “We knew what we’d be getting with him. He has a very good backroom team with him too and we’ve gotten off to a pretty decent start.”

A big championship match against neighbours Cavan looms ahead but in the meantime, Hughes knows there is a more urgent concern.

“In Division One you just have to take it week by week and game by game. The summer hasn’t been mentioned yet but the league will be wrapped up soon enough in another month and we’ll turn our focus to it then.

“It’s very important to us. We were lucky we stayed up last year on points’ difference. We realise the importance of staying up. If you look at the teams playing in the latter stages of the championship every year, they’re Division One teams.”