Westmeath faced the music but Dublin waltzed through 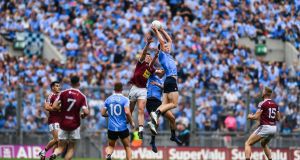 Be careful what you wish for. For everyone who pined for Westmeath to abandon the catenaccio of the past two years and ‘go for it’, Sunday at Croke Park provided a glimpse of a world maybe best left unseen.

The match nearly made it out of the first quarter as a contest but once Dublin got a stretch going on the scoreboard there was scant way of keeping it competitive, short of making the champions wear blindfolds.

The headline demolition work was done by Paul Mannion with eight points from play, a few of them sumptuous but the goals also tumbled after the first from Dean Rock in the 28th minute – palmed in after a fine run through the middle by the impressive Eric Lowndes – was supplemented by Eoghan O’Gara, Ciarán Kilkenny and, finally, Kevin McManamon.

It was as big a championship defeat as Westmeath have sustained and records suggested that Dublin had to go back to the 10-13 to 3-8 win over Longford in 1960 to come up with a higher score in championship.

Westmeath manager Tom Cribbin took it all on the chin, acknowledging that his team had been outclassed but adding that the players had wanted to test themselves more meaningfully than simply trying to brick up their goal. That approach he felt was the main reason why the margin of defeat was twice what it had been in the last two Leinster finals between the counties.

“To be honest my players wanted to have a go,” he said. “We played with one sweeper all year and they wanted to see where we are in the class rankings playing a team of that calibre. We honestly felt that we could be a lot closer to them. You know Dublin are a different class and there is no easy way about it.

“Yeah, our approach was the difference in the scoreline. I would say they are on a par. The only way we would handle them, and to be honest, I probably knew in my heart and soul before the game, we needed to get a minimum of 11 guys back, play the zonal defence and two sweepers but unless you have machines that can get up and down the pitch, you are not going to beat them.

“You might hold them back, might keep the score down, might keep huge scorelines going up against you by doing that but I don’t think anyone in Westmeath would have liked to have seen that again for the third year in a row and the players didn’t want it. They wanted to have a go.”

It’s hard to begrudge a team that ambition but they came with insufficient materials to give themselves a chance.

John Heslin, their go-to player, started at centrefield but moved into full forward and then back out again but to no lasting effect. Well marked and often with a sweeper in front of him, the St Loman’s player couldn’t get much traction up front and Westmeath were taken apart on their own kick-outs, something he couldn’t greatly influence when switched back.

He and his team mates were feisty enough in the opening exchanges – Heslin equalising Dublin’s first point from Con O’Callaghan and Kieran Martin chipping in a couple – keeping it to 0-4 to 0-5 after 13 minutes but gradually the champions began to pull away.

They are quite happy to go point-for-point as they build up momentum and such is the belief that they’ll eventually wear teams down that there’s rarely any need to inject urgency into proceedings.

O’Callaghan gave notice of his talent by landing three first half points, adeptly kicked off both feet and, although the strain told early, Westmeath resisted manfully.

Niall Scully, a late replacement for McManamon in the starting 15, was well blocked by Killian Daly in the first minute when a goal was on and in the 14th minute Scully set up Rock for a chance, which was also blocked – this time by Frank Boyle. A minute earlier, Paddy Andrews kicked a point after a passage of play in which only a fine save by Darren Quinn from O’Callaghan kept the ball out of the net.

Jack McCaffrey was blocked by Alan Gaughan for a 45 and Kilkenny rounded Quinn in the 26th minute but shot off balance and wide.

Eventually something had to give and, once Rock’s goal nestled in the net under Hill 16 to leave the score at 1-11 to 0-5, it was clear it would be a long afternoon for Westmeath.

Dublin were improved on recent matches. They played with pace and accuracy. Scully showed why he has broken through into the senior panel with an energetic game and the defence was calm and efficient. Centrefield had a good afternoon with Brian Fenton strong in the air and James McCarthy pushing forward but as Cribbin pointed out, Westmeath aren’t physically imposing in that area and that creates problems for the team as well as the goalkeeper trying to direct his kick-outs.

The second half went the way of the first but more quickly. O’Gara got a route one goal, catching and kicking into the net. Kilkenny buzzed in from the left and atoned for his previous miss whereas McManamon finished some nice approach work by under-21 newcomer Brian Howard.

In between points were zipping over the bar, most eye-catchingly from Mannion, including in the 64th minute when he looked to be skipping through a  field hospital to avoid a Westmeath player who was getting treatment before kicking his seventh.

“It was a big challenge,” said Dublin manager Jim Gavin afterwards in the brief section of his media conference devoted to the match, “and when you see a score-line like that some people might think it is just a case of the Dublin team turning up and that score-line happens. We prepared very diligently for this challenge. We have worked hard. Will that be enough for us to retain the Leinster title against a great Kildare side? I don’t know.”

1 Trump endorsement by Jack Nicklaus leads to avalanche of dismay
2 World Handicap System: What is it? How does it work? Will my handicap change?
3 England lay down marker for Ireland after bonus point win in Rome
4 Galway expose Wexford’s lack of Plan B to reach Leinster final
5 Dublin return from the dead to give Kilkenny a scare in Croke Park thriller
Real news has value SUBSCRIBE