For Rory McIlroy, golf is what he does, not what he is 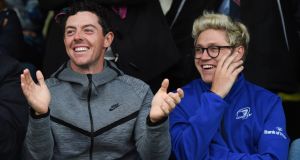 Rory McIlroy attends an Ulster v Leinster rugby match with Niall Horan – one of the many interests he has away from the course. Photo: Getty Images

A few Christmases back, Ukrainian winter conditions settled across Ireland and one of the expected consequences of the ice storm was that Rory McIlroy would probably miss a seasonal awards ceremony at a golf bash in Dublin in which he was to be the star guest.

By then, it was generally agreed that the future of golf itself was, to a large degree, contained within McIlroy’s lithe and jaunty frame. He had yet to win a Major but was hot property and probably didn’t need to be at the event. But he had been honoured there on his way up in the game and had the good manners to acknowledge that. The weather, however, gave him every excuse to miss out: the entire country was whitewashed, frozen and treacherous.

Driving down from Belfast would have been foolhardy – particularly for a guy who had famously crashed his Audi Spyder in a five-mile-per-hour accident in his front drive. But McIlroy turned up. Someone told me later that when they asked how he managed to get there, he just shrugged and said he took the train down from Belfast.

It’s a memorable image: McIlroy sitting in what was probably a deserted train carriage as it rattled Poyntzpass and outer Dundalk, trying to master the trick of opening the minute milk-containers to cool his scalding coffee and producing his ticket on command to be stamped by the conductor, who may well have worn a novelty Christmas hat.

It seemed light years removed from this week’s news that McIlroy had put his signature to an agreement to use TaylorMade clubs for the next decade of his golfing life in return for $100 million. The deal was a tidy piece of business to complement the reported $200 million he receives from Nike to wear their garb across the fairways. With endorsement power like that, much of the prize money on offer at the tournaments McIlroy plays is just chump change.

One of the exceptions is this weekend: the purse at this year’s Players Championship in Sawgrass is an eye-watering $10.5 million, with the winning golfer collecting a check for $1,890,000.

It is a little shocking to consider that McIlroy is 28 years old now. He spent such a long time as, firstly Irish golf’s and then international golf’s, equivalent of Chopin that it’s easy to imagine he has all the time left in the world to compose future masterpieces at Augusta or Royal Portrush or St Andrews.

But this is McIlroy’s longest spell without a Major title since he won his first – the US Open – in 2011. Coming directly after McIlroy’s tearful and crushing collapse in the final round of the US Masters, that first Major set him up as the kind of charismatic and personable young hero golf desperately needed after the Tiger Woods fable fell apart.

In responding to that dark hour in Augusta with his first Major win, McIlroy had demonstrated true grit. Both tournaments had illuminated the extreme voltage within his game and it was possible to see him as someone blessed or gifted with a rare talent that he couldn’t always harness or contain. McIlroy was just 22 and, perhaps unfairly, there was an expectation (and in Ireland, a hope) that this would be the beginning of a crusade and that he would begin to eat up Majors with a consistency which would justify the relentless comparisons with Woods.

And McIlroy has done extremely well in the years since. Three more Majors have followed: the PGA in 2012 and 2014 and the Open in 2014. He is sitting in good company in golf’s all-time honours list, flanked alphabetically by Bobby Locke and Old Tom Morris.

But at this midway point of his career, you begin to wonder where McIlroy might finish up on the all-time list. The peculiar thing about the comparisons with Woods is that, from the beginning, McIlroy has designed his career to make it the extravagant opposite of what golf was to Woods. At Sawgrass this week, he didn’t try to disguise his delight at watching Sergio Garcia’s first Major win at the US Masters. “I cried. It was unbelievable.”

McIlroy and Garcia are good friends. The kind words cost McIlroy nothing and were a further example of the impeccable sportsmanship which both sponsors and golf’s custodians love. But it is hard to imagine, let alone recall, Woods ever revealing how the sight of a fellow competitor beating him to a title – which is what happened – had moved him to tears.

Tormented by his performance

It’s true that by the final round at Augusta, McIlroy knew he was out of contention. On one level, his capacity to set aside his personal disappointment and enjoy his friend’s long-awaited moment of glory is admirable. But on another level, if you are a McIlroy fan you kind of want to hear him say that he was so miserable and tormented by his performance that he couldn’t even watch the finish of the tournament – that he was just too wrapped up in himself.

That, of course, would fly in the face of everything he has stood for. Even when he was stepping from the large shadows of Graeme McDowell and Darren Clarke, McIlroy was careful to stress that golf was what he did, not what he is.

He is from neither place: he is from Northern Ireland, which is as much a state of mind as a geographical location

As early as 2009 he was regaling Donald McRae, the Guardian’s great profile writer, with tales of Belfast’s demi-monde. He has tried valiantly to retain his grasp on normalcy in his ascension to the highest tier of athletic fame and international branding. Practically everyone has seen the grainy clips of the eight-year-old chipping balls into the open door of a washing machine on Gerry Kelly; light Friday night entertainment in the midst of a dark epoch for Northern Ireland.

He has, by any definition, made it in spectacular style since that precocious appearance. He has been occasionally spiky in his views and copped flak for his flimsy excuse of the Zika virus for skipping the Rio Olympics.

But the tired debate over whether McIlroy would declare for Britain or Ireland and pin his colours to the mast as to where he came from missed the point. He is from neither place: he is from Northern Ireland, which is as much a state of mind as a geographical location. The defiance of an overwhelming public wish to declare and play was in keeping with a fierce grasp on his independence and a determination to enjoy his life.

Epicentre of the golf world

There is still, of course many years for McIlroy to stride into the rarefied country of Bobby Jones or Gary Player. Golf is less brutal than other sports with time. Garcia was 37 when he won his first Major, Adam Scott and Dustin Johnson were also in their 30s and Darren Clarke was, of course, 43 when he claimed the British Open in 2011, when Portrush seemed to be the epicentre of the golf world.

But Woods had already bagged 10 of his 14 Majors by the time he hit 30. There is no telling when the gift begins to leave. In his pomp, Woods’ mere appearance at a Major championship was enough to crush the morale of the field. McIlroy has never generated that fear and his days of untouchable brilliance seem set to visit him in unannounced, mystifying bursts. Maybe that’s the price he has paid, amidst a torrent of rewards, for deciding very early in his life not to allow golf to become his everything.