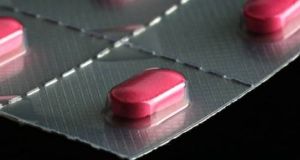 The big worry in Ireland is where exactly are the massive doses of steroids that are not seized ending up? Photograph: Getty Images

We all have our own different tell-tale signs of the recovery. The 70 per cent rise in average monthly rents since the bottoming out in the recession, now 23 per cent higher than their Celtic Tiger peak. The now record €727 billion net worth of Irish households, eclipsing the previous peak of €720 billion reached in the second quarter of 2007.

The 449,411 units of ready-to-use anabolic steroids seized in Ireland last year, up over 300 per cent on the 2016 figure. Booms times are back alright, baby.

Not many people took much notice of those last figures, possibly because these aren’t exactly class A banned substances, although it is illegal to procure anabolic steroids in Ireland without a prescription, or, indeed from anywhere other than a pharmacy. No wonder those with a closer eye on the business are properly startled.

“This is an exceptionally dangerous endeavour,” Caitriona O’Riordan, executive committee member of the Irish Pharmacy Union, told its annual conference in Wexford last Saturday, “which indicates a possible rise in the number of people using these drugs to build muscle mass and boost sporting performance.”

These don’t come cheap – but are significantly less expensive without the required prescription and medical supervision, and standard quality control. Those sourcing them outside the realms of elite and competitive sport aren’t strictly cheating on anyone either, unless, of course, they count themselves.

The big worry here is where exactly are the massive doses of steroids that are not seized ending up? Those 449,411 units were part of the 948,916 dosages of tablets, capsules and vials seized throughout 2017 in the joint operations of An Garda Síochána, Revenue and the Health Products Regulatory Authority (HPRA) – and that represents an increase of 40 per cent on the 2016 figure of 673,906.

The HPRA has been keeping a close watch on these figures in recent years, especially as the country comes out of recession, and, like rents and net worth of Irish households, there is a trend here.

That’s the amount seized, remember, which means the numbers getting through must be several times higher. That’s a lot of steroids for a lot of people, and even if some of them are being smuggled on to foreign athletes, it begs the question: who exactly in Ireland is taking them?

A quick Google search will tell you they are aimed primarily at the amateur gym enthusiast. But that doesn’t mean they are not ending up in the hands of our amateur rugby and GAA players, or any amateur sport where body size and body image is becoming increasingly more important than raw talent, especially, it seems, at schoolboy level.

Part of the problem here is that Sport Ireland is not in the business of policing amateur or recreational sport when it comes to anti-doping. Therefore there is no great deterrent to avoid them unless the risks are considered (why anabolic steroids are controlled in the first place) such as being more than mildly addictive, and typically end up decreasing sex drive.

Not forgetting the potential for heart and liver damage, or the very definite risk of injecting with dirty needles. Those who run needle exchanges, such as Merchant’s Quay Ireland, have been warning of that danger in recent years.

In one of his last acts as director general of the World Anti-Doping Agency (Wada), David Howman admitted he was worried about the “entry level and amateur athletes” just as much as the “elite athletes”.

He said in 2016 that the biggest threat to the integrity of sport was no longer from the top down, but rather the bottom up. “Only that’s the area where there’s no testing,” he warned. “That’s the concern.”

Given that 449,411 units of anabolic steroids were seized here last year, that concern should be greater than ever.

Dr Una May, head of Sport Ireland’s anti-doping committee, has admitted that too. “It is a really big concern,” she said at its annual review in March. “We can see one of the places it’s coming in is the gym and leisure industry side of it, and we’ve been working over the last number of years to introduce a sort of ‘white flag’ scheme, although it would the reputable leisure centres who would be interested in that anyway.”

Of the 989 tests carried out by Sport Ireland in 2017 across 22 sports, only one came back positive from an in-competition test. That case, for a banned substance, is still pending, the identity of the sport or individual yet to be revealed.

One can only wonder what they might find if Sport Ireland moved a little further down the elite chain, testing more of our strictly amateur sports, or even into schoolboy rugby, where for now Sport Ireland insists it is not in a position to carry out anti-doping controls even if it wanted to.

This may not help answer the question of where all these anabolic steroids are ending up. They may, however, find some tell-tale signs of sporting recovery.