Davy Fitzgerald: ‘The stadium is incredible, so it’s a pity about the top of the surface’ 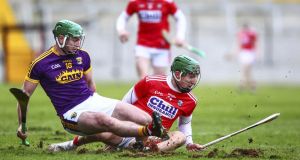 Davy Fitzgerald praised the attitude of his side in dealing with less-than-perfect Páirc Uí Chaoimh pitch on Sunday.

Having hosted the Cork-Kildare Division 2 football tie beforehand, the surface cut up badly, but Fitzgerald still saw his side push clear of their hosts in the final quarter and was pleased with how they approached the task.

“We knew before the game that the surface was pretty bad,” he said, “and you can see that we knock the ball around pretty okay, whether it’s ball to hand or on the ground.

“We made up our minds that no matter what the surface was like - you’re coming down thinking things will be pretty good, the stadium is incredible and I love it, so it’s a pity about the top of the surface.

“It’s actually quite solid, I don’t know why it’s tearing on top as much as it is. Even when I was a player one place I loved coming was down here. They need to have a look at it, I’m sure they’ll get it right.”

Wexford might have had a goal in the first 30 seconds but Anthony Nash saved well from Conor McDonald and Cork pushed on from that, with Aidan Walsh impressing as he scored two points in quick succession to leave them 0-9 to 0-7 in front by the 26th minute, Cathal Dunbar with two of the Wexford points.

However, Wexford struck for a goal just after that, David Dunne prodding home when Kevin Foley’s point attempt dropped short and wasn’t dealt with the by the Cork defence.

The hosts would never lead thereafter, though they were unlucky early in the second half as Patrick Horgan fired a shot against the crossbar - Walsh sent the rebound over - and they did draw level at 0-14 to 1-11 in the 48th minute after Bill Cooper, Horgan and Daniel Kearney all pointed.

It was a test of Wexford’s mettle but they had the answers as Jack O’Connor put them back in front and then Paudie Foley set up O’Connor’s brother Rory for his second point. Though Conor Lehane replied for Cork, Jack O’Connor was fouled for a Wexford free and while he was unable to take it as he recuperated, Foley sent the ball over.

Two more from a recovered Jack O’Connor had them 1-16 to 0-15 in front and that was the margin at the end, Wexford goalkeeper Mark Fanning saving a late Patrick Horgan free.

It means a second straight loss for Cork, but selector Donal O’Mahony doesn’t feel that the lack of a relegation threat means a lack of intensity from his players.

“I don’t think so,” he said, “we’d definitely hope not. We’ve never discussed it so it isn’t a factor in our thinking.

“Our objective in the league is to introduce new fellas, there’s a few fellas back to us as well - Cormac Murphy, Steven McDonnell, those fellas - integrate them back into the setup and the way we’re playing and things like that.

“So there’s a bit of learning to be done. But as I say we need to learn fast, the way we’re going at the moment.”

Racecourse betting ring rallies in 2019 with increase in turnover 01:00
Niall Quinn and Gary Owens reassure FAI staff about future 01:00
Sizing John set for return to fences in Irish Gold Cup 01:00
Wembley is the sole focus for Leicester and Aston Villa 22:30
Youthful Arsenal secure passage into FA Cup fifth round 22:29
Crossword Get access to over 6,000 interactive crosswords